For our penultimate Social Series concert on April 8th, we've scheduled a refined doubleheader of sorts -- a  private tour of the APS Museum's new exhibition Of Elephants and Roses: Encounters with French Natural History, 1790-1830 followed by a complimentary wine tasting with our friends from PINOT Wine Boutique before the concert and at intermission. 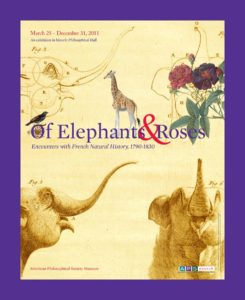 Led by APS Curator Jenni Drozdek, the museum tour will take place between 6:30 and 7:15 pm in the Society's Philosophical Hall (located at 104 South Fifth Street just southwest of Franklin Hall). Featuring objects such as a mastodon tooth sent by Thomas Jefferson to the Paris Museum of Natural History and original watercolors by Pierre-Joseph Redouté, the exhibition explores the science and art of French natural history from the 1789 Revolution to the July Monarchy of 1830 -- an era when Paris was the center of life sciences in the Western world and Philadelphia was the center of science in North America.

Following the museum tour, our resident oenophiles -- otherwise known as Dan and Dave from Market Street wine mecca PINOT -- will welcome you back to Franklin Hall with tastes of their award winning “Wines in a Paintcan” from the Paradox Vineyard, a family owned and operated winery in southern Chester County. If you're a wine lover and haven't been to PINOT before, you'll certainly want to pay a visit to their Old City store front (located at 227 Market Street) before your next concert.

Steven Tenenbom (Orion Quartet) responds to questions: Why this repertoire? Why now?