With an international career that finds her in both opera houses and concert halls, Ana María Martínez brings a program to Philadelphia that we don’t often hear—works by Rodrigo, Granados, Lecuona, de Falla, Moré, and Capó. In addition to her busy performance career, this Grammy Award winner is a passionate advocate for young singers. We recently discussed her upcoming debut program with Craig Terry and her thoughts on beginning a career in music.

Erik Petersons: You are presenting an all-Spanish program for your recital on March 16. How did this program come together, and are there personal connections with any of the works?

Ana María Martínez: First, I would like to say how excited I am to be performing with PCMS! Craig and I are greatly looking forward to offering this program which we love so deeply with all of you.

This program is very close to my heart because it is an all-Spanish recital, and Spanish is my first language. The first half offers song repertoire that is considered to be among the staple pieces of the Spanish vocal song literature. I chose these because they are gorgeous, they encompass the full spectrum of human emotion, and they are also part of the discovery process for young classical singers and pianists. These songs become part of a young artist's life at the time that they are focusing on technique and touching on expression and often accompany the artist throughout their life and career. When that bond with repertoire is formed, a life partnership and honest gauge is made.

The second half of the program offers more recent jewels (mainly circa 1930s-1940s) from Puerto Rico, Cuba, Spain, Mexico, and Argentina. These are classical selections but more popular songs at the time they were composed. They are romantic, nostalgic, beautiful. With all the pieces, I feel a strong emotional connection from having heard them while I was growing up and reveling in their relaxed melodies and powerful poetry. 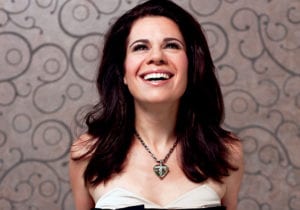 EP: You will also be performing a selection of Zarzuela. Where does this genre originate, and how would you characterize the works you will be performing?

AMM: The roots of Spanish Zarzuela are in 17th century Spain. The first performance took place in the Royal Palace of El Prado, in Madrid. It resembles the form of an operetta, which means that there are scenes with spoken dialogues. The stories can be tragic or comedic. There are also Zarzuelas from Cuba and Mexico, among others. The Zarzuela of the 17th century is considered Baroque, and the Zarzuela from the 19th century is Romantic. We offer a Zarzuela aria from the Cuban Zarzuela, María La O, by Ernesto Lecuona. This one is an ideal example from the Romantic era of the genre.

EP: Tell us about your collaboration with Craig Terry and what it is like to work with him.

AMM: Collaborating with Craig Terry is always a wonderful and happy experience! Craig has great ideas, and together we can create and shape a program in such a way where pieces that mean the world to us are offered from the heart. We met while working on the Spanish Opera, Florencia en el Amazonas, by Daniel Catán, at Houston Grand Opera years ago and enjoy performing recitals together on a regular basis.

EP: You have a strong interest in encouraging the next generation of singers. While you are in Philly, you will be visiting vocal students at Esperanza Academy Charter School. What do you find is most important to pass on to students who are still finding their own voices and aiming for a singing career?

AMM: I firmly believe in encouraging people to fulfill their full potential and to follow their dreams. Dreaming big is important, and just as important is discipline, focus, and daily work, which lead to being prepared and equipped for the long journey of this career.

EP: What are the unique characteristics and expressive potential when comparing art song and opera?

AMM: As young singers we begin, or at least we should begin, with art songs. The early Italian art songs, for example, allow us to work on our technique so that we begin to craft the tools we will need in order to sing the operas of our dreams in the future.

Think of an art song as a short story and an opera as a novel. The art song will therefore offer everything of the story in just a few pages, while the opera can expand the story, having plots and subplots.

There is the obvious difference in that an opera has an orchestra and simply by length alone, the opera is very long in comparison. Now, when you are talking about a song cycle, some can be quite dramatic and of greater length.

The healthy foundation for the stamina to be able to sing a full length opera is established in the early steps, thanks to the art song.