Bassoonist Brad Balliett is more than a musician; he is quite the well-rounded artist with a uniquely creative mind and one who finds inspiration from classical texts, his community involvement, and his earliest musical memories. In our interview below, Mr. Balliett shares with us his many passions: bassoon, composition, social and community impact, teaching, and Shakespeare.

Jessica Wolford: Decoda’s debut performance with PCMS on April 11 includes the Philadelphia premiere of your piece, Reveler-Scherzos. How would you describe this piece?

Brad Balliett: Reveler-Scherzos is a one-movement woodwind quartet in the form of a big scherzo. As I was composing it, I had a vision of a parade of various characters, some animal and some human, each performing an idiosyncratic dance. I let the musical material determine which characters appear, which is why they range from animals (birds of prey, elephant seal...) to imaginary people (an Eternal Optimist, a Sad Songstress, a Nervous Skinny Guy...) to groups of people (Girls in Bird Masks, Pickpockets, Willow People...). When the music was finished, I called upon my friend Will Storie, a wonderful artist, to create line drawings for each of these characters. These drawings will be projected as we perform the piece. Although the music works without the drawings, I find that they create a unique atmosphere and narrative for the piece.

JW: The ensemble is committed to a “quest for social impact.” Can you tell us about some of Decoda’s initiatives? I’m especially intrigued by the Music for Transformation criminal justice initiative. What has that experience been like for you?

BB: Decoda is committed to providing meaningful musical experiences for any and every audience, and we try to make sure that each project includes a social impact component. Some of our most successful and satisfying projects take place in communities that don't have access to much live music, including hospitals, shelters, and correctional facilities. During these projects, we work with members of that community to help them create their own, personal music through collaborative songwriting workshops. We've found these communities to comprise some of the most insightful, communicative, and appreciative audiences we've ever played for, and these projects have become an integral part of our work and our life.

Two recent projects have been especially meaningful to me; both are part of our Music for Transformation initiative. For four years, under the leadership of cellist Claire Bryant, Decoda has been traveling to Lee Correctional Institute, a maximum security prison in South Carolina, to craft concerts of original music. The program and the musicians involved have grown by leaps and bounds, creating some songs that will be favorites of mine for the rest of my life. Last year, they worked for months on an evening-length set of songs about the life of Abraham Lincoln, which was performed inside the prison to a packed audience.

The other recent project was designed by horn player Laura Weiner, which brought together New York City teens and NYPD officers to write songs collaboratively with Decoda members. The energy in every session was electric and overwhelmingly positive, and the culminating concert in Carnegie Hall was a very special evening for everyone involved.

JW: You’ve composed works for chamber ensemble, orchestra, choir, and opera. When and how were you drawn to composition?

BB: I've been composing almost as long as I've been playing music. I remember playing on the piano in my grandfather's house when I was a child, and the excitement of learning to write down the tunes that I played. When I began playing violin and clarinet in elementary school, part of the joy of practicing for me was making up my own music. Performing music and writing music go hand in hand for me; they seem like two sides of the same coin. I wouldn't feel complete doing one without the other.

From the very beginning, I've also composed collaboratively with my twin brother Doug, who played the horn when we first started writing and is now on the bass faculty at Juilliard. We would write duets to play together then, and we still write a lot of pieces together, including a Concerto for Bassoon and Double Bass that we premiered last year with Ensemble Echapée. We are currently working on a piece for alto soloist, chorus, and orchestra for Cecelia Chorus to be premiered in 2019.

JW: As a bassoonist, you perform with the Princeton Symphony as Principal Bassoon, with a handful of New York ensembles (including Decoda), as a soloist, and participate in summer festivals and as an educator (newly appointed to the Peabody Faculty - congrats!) in addition to composing. How do you strike a balance with your busy schedule?

BB: There are times that I focus on composing, times that I focus on practicing bassoon, and times that I focus on social impact work or teaching. All three areas are important for me to feel musically fulfilled. When I'm in the middle of a big project in one of these three fields, I have to be okay with letting the other stuff go for a little bit so that I can give the task at hand all of my energy, but if I leave one of these aspects of my musical life alone too long, I start to feel something missing and will shift focus to 'correct' the imbalance. In a normal week, though, I'm bouncing back and forth between projects that hit all three fields. My ideal day is one that hits everything—practice in the morning, workshops in the community in the afternoon, composition at night.

JW: I’ve heard that you’re a fan of the Bard. Do you find inspiration from Shakespeare’s works for your own artistic endeavors?

BB: Yes! I love Shakespeare and would definitely choose to be a poet or playwright if I were not a musician. Shakespeare is a bottomless well of inspiration for me. My brother and I have composed incidental music for many of the plays together for our 'Interactive Shakespeare Parties,' in which attendees volunteer for parts and we read the plays aloud together. I have written instrumental pieces based on certain Shakespeare scenes as well, such as my bassoon quartet, which is based on a scene from Henry IV. A character from Othello makes a very brief appearance during Reveler-Scherzos, which is on our PCMS program—if you watch the screen carefully as we play, you won't miss him! 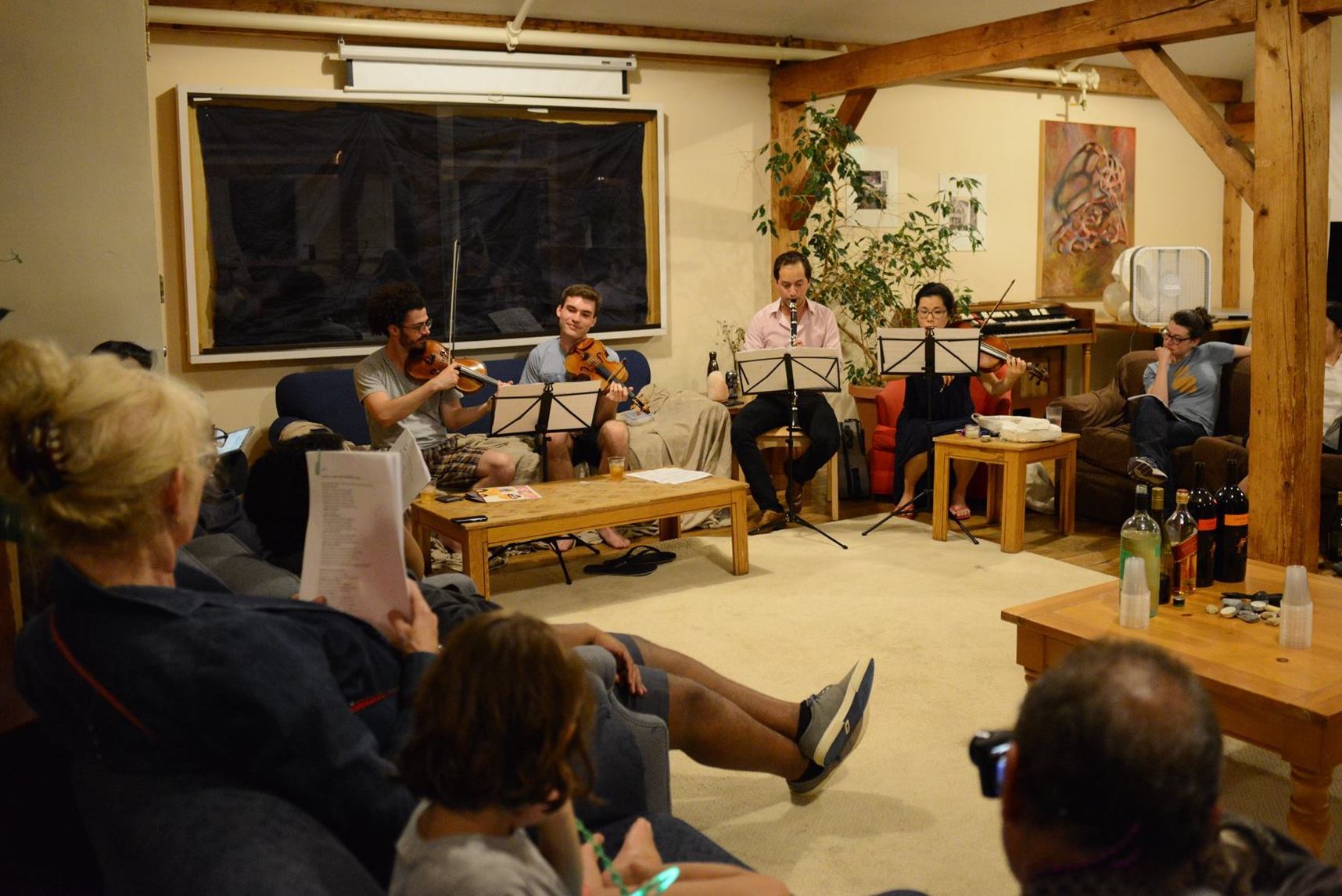 JW: Back to the basics for this final question: why/how did you choose the bassoon?

BB: I've always been drawn to wind instruments—the incisive sound, the clear articulation, the endless combinations of interesting colors—so I was excited to start a wind instrument in 5th grade growing up in Westborough, Massachusetts. I started on clarinet, but I wanted to play something a little bit different than what all the other kids were playing. As soon as I tried the bassoon, the combination of its sound (which I thought of as 'electric') and its unique challenges had me hooked. I've stuck with it ever since.

Brad Balliett performs with Decoda on Wednesday, April 11 at 8 pm at Benjamin Franklin Hall at the American Philosophical Society. For tickets and information, visit the concert concert page. For more information about Mr. Balliett, visit his website.