Going into her ninth season as Principal Tuba of the Philadelphia Orchestra, Carol Jantsch has been praised as "a soulful soloist with gentle vibrato" and for "a sound as clear and sure as it [is] luxurious" (Philadelphia Inquirer).  Earlier this week I connected with Carol to discuss her November 9th performance at the Philadelphia Museum of Art, her work with composer Michael Daugherty and her tuba throwing skills.

Patrick Burke: You won your position as principal tuba with the orchestra in 2006 while you were still at the University of Michigan, and by doing so you became the first woman to hold that position in a major orchestra. Could you tell us about the audition process and what winning the position meant to you?

Carol Jantsch: Since there's only one tuba in every orchestra, a tuba audition is a once-in-a-lifetime opportunity. When the Philadelphia Orchestra first announced their opening, they had about 200 applicants. Since I was just an undergraduate student at the time, my resume was initially rejected, but luckily an audition tape I made for a summer festival was heard by some PO members, and I was given the opportunity to play in the next round of auditions. I feel extremely lucky and grateful every day to be a member of such an incredible ensemble, and I do my best to live up to the standard set by my amazing colleagues.

PB: Your November 9th program will be the first tuba recital in PCMS history. How did your program come together, and what should our audience know about solo and ensemble works for tuba before they come to hear you? 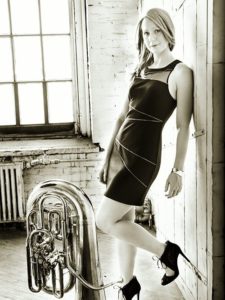 CJ: The tuba is one of the youngest members of the orchestra in that it was one of the last to be invented. It has only really been written for as a solo instrument since the second half of the 20th century, and both performers and composers are still pushing the boundaries of what the instrument is capable of. My hope for this program is that the audience can enjoy a variety of great music that just happens to be played on the tuba.

PB: Last year you premiered Michael Daugherty’s Reflections on the Mississippi, a work written for you. How did you come to work with Mr. Daugherty and how involved were you in the process of writing the work? How important was it to have a major concerto written specifically for the tuba?

CJ: There will never be a famous Brahms Tuba Concerto or Beethoven Tuba Sonata. Of course we can modify some of the existing masterworks to fit our instrument, but it's not the same as having an original work written for us. A concerto commission from a famous and talented composer like Michael Daugherty is a huge deal for the tuba world, since it both raises the prominence of the tuba player as soloist and fills a hole in our repertoire. I got to work closely with Michael on the project, and I'm very proud of the way it turned out, both utilizing the tuba well and just being a generally likable piece. Come hear the piece in late March when I make my subscription debut as soloist with the Philadelphia Orchestra!

PB: You’re obviously a very active musician and teacher, but you also have some other interesting hobbies. Could you tell us more about your ultimate frisbee and tuba throwing careers?

CJ: Sadly, tuba throwing is not so much in vogue these days. It used to be a staple at every tuba conference before the powers that be (who apparently hate fun) decided it's not the greatest way to promote the instrument. I won the women's division at the 2001 International Tuba and Euphonium Conference in Lahti, Finland, since I was the only girl willing to follow the momentum of the horn into the lake, thus winning my advantage.

Ultimate frisbee (the team sport, not frisbee golf) is pretty much the best. I learned how to play at Interlochen Arts Academy and played competitively on the women's team at the University of Michigan–we even went to Nationals my senior year! I still play in leagues in Philadelphia; it's a really fun way to stay active and meet interesting people. Ultimate tends to attract lots of nerdy, creative and fun people, and for me it has become a fantastic source for non-musician friends.

Carol Jantsch, tuba appears on Sunday, November 9, 2014 at the Philadelphia Museum of Art. For tickets and information visit the concert page.

For more information on Carol Jantsch, visit her website.