Violinist David McCarroll (far left) has been a fixture at the Marlboro Music Festival for the last six summers. Winner of the 2012 European Young Concert Artists Auditions and Silver Medalist at the Klein International Competition, he has performed throughout Europe and the Americas. David returns to the PCMS stage in three performances over our 2014-15 season, and he was kind enough to speak with me about his humble roots, his charitable endeavors, and of course his Monday, October 13th opening night performance with Musicians from Marlboro.

Patrick Burke:  You have a really interesting educational history, having studied with some of the world's best teachers on both the east and west coasts, in London and now in Berlin. Could you tell us in more detail how you started your studies and what life is like for you in Berlin? 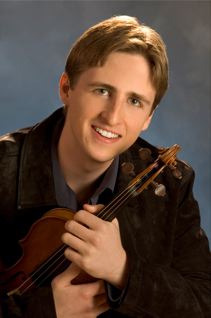 David McCarroll:  My parents aren't musicians, but apparently I pestered them about playing the violin from the age of two after seeing Itzhak Perlman on Sesame Street. They started taking me for lessons when I was four (no small feat, as we lived very far from any town in Northern California) and when I was 8, I began studying with Anne Crowden in Berkeley, California. She was quite an amazing woman who had emigrated to the US from Scotland and started a music school called The Crowden School for 9- to 13-year-olds in the lower floor of a church near UC Berkeley. After my four years there, she recommended that I go to the Yehudi Menuhin School in England. She knew Menuhin and had loosely modeled her own school after his. I ended up going to this small boarding school (an old English country estate outside of London, converted into a school) for five years from 13-18, studying with Simon Fischer. At the time, I couldn't have known whether it was a good idea to leave home so early, but I ended up having a great time there, in an environment immersed in music, good friends, and lots of soccer as well!

From there I went to Boston to study with Donald Weilerstein and Miriam Fried at the New England Conservatory, and finally to Berlin to study with Antje Weithaas. It goes without saying that these are teachers I am immensely grateful for. I've continued to live in Berlin, a city that has an enormous amount to offer culturally, although much of the time I travel for concerts and am often in the US as well.

PB:  Having just completed your sixth summer at the Marlboro Music Festival, you’re jumping right into the touring aspect of Marlboro. Could you tell us about how those two experiences differ from one another?

DM:  The summers that I've spent at Marlboro have been incredibly important for me. It's a place where you seemingly have unlimited time to explore chamber music works in great depth, and during one summer,you will rehearse many more pieces than you actually perform. Being able to come back to these pieces and groups two or three years later on tour gives an added dimension to this process, and it's exciting to see how these pieces develop further over many performances. And of course it's also great to be able to share these performances with audiences who can't be in rural southern Vermont for the festival.

PB:  The program for the Musicians from Marlboro October 13th performance is rather eclectic. Could you talk about how this program came together–particularly the works by Kurtág and Szervánszky?

DM:  There's a very strong link between the works by Kurtág and Szervánszky. The final movement of Kurtag's quartet "Officium Breve," which starts the program, is a haunting quotation from the slow movement of the Serenade for String Orchestra by Szervánszky, who was Kurtág's mentor. So it is fitting that this is directly followed by a work of Szervánszky himself for flute, violin and viola. There is a further link in the program in that Kurtág is also known for his deep understanding of Beethoven's music, in particular his string chamber music. Beethoven's string quintet is not known or played as much as his quartets but is a (mostly) light and humorous piece, with the finale even seeming to preempt Rossini!

PB:  You have the distinct honor of not only opening the 2014-15 PCMS season but also closing it when you return with the third Musicians from Marlboro tour on May 7. Could you tell us about how that program (featuring Beethoven Op. 81b, Brahms Op. 51, No. 1 and Mozart K. 251) came together?

DM:  The idea for this program started with a memorable performance (certainly for us) of the Brahms C Minor string quartet several years ago at Marlboro with Itamar Zorman, Hélène Clément, and Peter Wiley, and I am very happy we'll have the chance to play it again. With Peter and Itamar living on the east coast, Hélène in London, and me in Berlin, it will also be wonderful to reunite for this tour. To this group of four strings, the Beethoven adds two horns and the Mozart a further oboe and bass. These are fantastic pieces that are not performed as often, probably due to their unusual instrumentation. It really is an honor for me to be coming to PCMS to begin and end the season, and I must add that I'm also looking forward to being there on December 17 with the Gamut Bach Ensemble program that Koji Otsuki has curated.

PB:  You are also very active in a number of charities and social platforms outside of music, including Doctors Without Borders and the Starcross Community. Could you talk about how you became interested in and involved with these groups, and what kind of work you are doing with them?

DM:  This really comes from my family upbringing, which was a bit unusual. I'm very lucky to have been adopted by my parents at birth, and for many generations, they have cared for children, many with AIDS, in the US as well as in Romania, South Africa and Uganda. They started the Starcross Community long before I was born, and being a part of these projects was simply part of growing up for me.

You also asked about Doctors Without Borders, which I've played several benefit concerts for. I find this to be a very inspiring organization, especially with all the conflicts in the world which leave almost unimaginable numbers of people sick, homeless and helpless. [Participating in these concerts] feels like the least I can do.

For more information on David McCarroll, violin, visit his website or click here to hear his 2012 performance at Marlboro of Beethoven's String Quartet in B-flat Major, Op. 130, with GroíŸe Fuge, Op. 133.