Founded in 1999, the Enso Quartet has quickly become one of the country’s most celebrated younger ensembles. Despite their hectic touring schedule, I spoke with cellist Richard Belcher via email about their upcoming PCMS debut, the ensemble's connection to the Guarneri Quartet and their plans for the coming year.

Patrick Burke: Your April 20 program features the Philadelphia premiere of a quartet by Gillian Whitehead. Could you describe your collaboration with her? What inspired this work and what are its greatest challenges?

Richard Belcher: We were thrilled when Gillian wrote this piece for us for our tour of New Zealand in 2012. We spent a short time with her working on various performance aspects of the piece while in New Zealand, but a lot of the dialogue took place via email in the months leading up to the tour. The piece was written for a friend of Gillian's, the writer and oral historian Juanita Ketchel, who had been diagnosed with cancer, and passed away during the piece's composition. The title, "No stars, not even clouds..." comes from a letter of Juanita's. It's a beautifully atmospheric piece that alternates between the quartet playing as a unified ensemble and short cadenzas that act as sort of lamentations or reflections on the preceding music. Gillian also told us that each time she started writing the piece at her studio on the Otago peninsula, a particular korimako (New Zealand bellbird) seemed to begin singing vociferously, and the sound of that birdsong found its way into the music. We're excited to be giving the Philadelphia premiere of this work.

PB: Your program also includes the Verdi Quartet in E Minor which you recorded last year alongside works by Strauss and Puccini. Could you discuss this rarely performed Verdi quartet? Additionally, could you tell us more about the Quartet’s most recent album?

RB: We're so happy Verdi wrote his quartet! It came to be written in interesting circumstances. Verdi was present at a production of Aida, and there was an extended break in rehearsals while the leading soprano was ill. I'm not sure if it was really just to pass the time or not, but it was during this break that Verdi wrote the piece, and had it premiered by members of the orchestra in his hotel! After the performance, he was said to have stated "I don't know whether the quartet is beautiful or ugly, but I do know that it's a quartet!" It's fascinating to hear how Verdi–someone so strongly associated with operatic writing –wrote for string quartet alone. The piece has typical Verdi flair and expression, and knowing what we do about him as a composer, it almost gives us more freedom to explore the drama it contains.

We loved playing the Verdi from when we first learned it back in 2008, and had ideas to record it from shortly after that time. What to record with it? Starting with another Italian opera composer seemed an obvious choice, and with Puccini having written the beautiful "Crisantemi" that was settled very quickly. We found Puccini's 3 Minuets for quartet to be wonderfully charming vignettes, and they also act as a happy foil to the brooding and emotional "Crisantemi". We were really excited to find that a young Richard Strauss had written a solitary string quartet. Another composer who we associate with much larger scale works, this worked perfectly for the album. It's very classical in its form, and it's pretty clear Strauss had studied the great masters, particularly Haydn and Mendelssohn. But it is unmistakably Straussian in its virtuosity. We've often thought if Mendelssohn had lived on longer he might have written a quartet that sounds like this one.  It's a lot of fun, and has all the hallmarks of a great classical quartet–a sparkling scherzo, a gorgeous, lyrical slow movement surrounded by effervescent and vivacious outer movements.

PB: For the conclusion of this program, Michael Tree and Peter Wiley will join the Quartet for Tchaikovsky’s String Sextet, Opus 70. How did this collaboration come about and what are you most looking forward to in this performance?

RB: We're so excited to be playing with Michael Tree and Peter Wiley. I think for anyone playing in any string quartet today (certainly in the US) we owe a huge amount to the members of the Guarneri Quartet. We all grew up listening to their recordings, and were lucky enough to hear them several times live in concert. At one of our first festivals as a quartet we were fortunate to be coached by Michael Tree, and Melissa (our violist) studied with him at Curtis, and also worked with both him and Peter at Marlboro. So it makes sense for us as we debut with PCMS to perform with mentors of ours who have such a close association with Philadelphia. What an honor to join them on stage together! As with anything, most of the work for this sort of thing takes place ahead of the performance–simply spending time together in rehearsal will be a highlight, and then bringing the result of that process to share with the PCMS audience will be the icing on the cake.

PB: As the Enso’s  2014-15 season comes to a close, could you reflect on some of the highlights from this season (I’m sure spending time at the St. Bart’s Music Festival this January is high on that list) and also tell us about some of the Quartet’s upcoming projects? 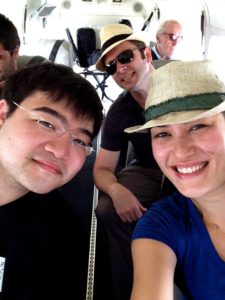 RB: You're right–getting down to the Caribbean in January is not a bad thing to do! We were in the midwest just prior to the St Bart's Music Festival, and in NYC and Vermont right afterwards during some of the coldest weather of the year.

We've visited some stunning concert halls this season too, which are always a joy, especially when they pop up in surprising or unexpected places. It might be cliché, but it's absolutely true (and I know I speak for all of us) in saying that the real highlights come from sharing such wonderful music with our audiences. Each one is unique, and it's an amazing experience when we're able to feel the energy from listeners and feed off that. That's one of the thrills of playing chamber music–sharing it not only with my incredible colleagues, but also the audiences who really care about this amazing art form.

We're looking forward to visiting some beautiful places this summer –some for the first time and many that we're returning to. Looking slightly further ahead, we're excited about the 100th anniversary of Alberto Ginastera in 2016. His quartets are so exciting–we were so honored to win a Grammy nomination for our recording of them (in a nice coincidence, the Guarneri was nominated the same year as us!), and we'll be featuring his quartets in the next two seasons for some tours both here in the US and internationally.

The Enso Quartet performs with Michael Tree, viola and Peter Wiley, cello on Monday, April 20 at the Kimmel Center's Perelman Theater. For tickets and information, please visit the concert page.

For more information on the Enso Quartet, visit their website.

The Science of Music