For our fourth artist interview of the season, flutist Joshua Smith was gracious enough to sit down and answer a few questions about his upcoming program at the American Philosophical Society. Here are his answers. I hope they help to illuminate the artist behind the music, and that learning a bit more about this program inspires you to attend Josh's December 13th recital with pianist Christina Dahl.

Juliet Woods:  How did this program come together? Why did you choose these particular pieces? 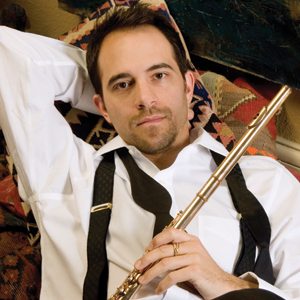 Joshua Smith:  This program plays with love. Romanticism as a movement (with its corresponding expressions of turbulence, its manic energy, and its embrace of the awareness of the life cycle) and romance as a journey (and the corresponding life-affirmations that come from yearning, loving, hoping, resigning, and maybe eventually finding peace) are the philosophical currents that unite all of these pieces. Curating programs is one of my great joys, and these themes intersect here on so many levels that it's hard to talk about it briefly, but I'll try:

Schumann epitomized the role of the tortured lovelorn artist so completely that most all of his music seems autobiographical. While Three Romances has no specifically ascribed program, it embodies all of the above tendencies: it's tempestuous and yet calm, pushes and then pulls, feels simple but complicated. It's a soulful and spontaneous journey.

Debussy's use of Greek mythology reflected the Belle Epoque's fascination with exoticism. In Syrinx and Faun, Pan suffers the frustration of pining after elusive wood nymphs. They're intricately beautiful pieces, both connected not only to myth, but to French poetry, and both impressionistic and expressive. I've always thought of Syrinx not only as a tale of unrequited love, but as an exploration of creativity: Syrinx, the nymph, is transformed into riverside reeds, which Pan uses to create a flute, thus giving himself a way to express his love through music.

Schubert's songs explored boundaries between classicism and romanticism, using music and poetry to express love and loss. Die schöne Mí¼llerin focuses on the unrequited love of a young man for a miller's daughter. In Trockne Blí¼men ("Dried Flowers"), the emotional turning point of the song cycle, the man considers suicide, equating his awareness of the seasonal cycle -- that withering flowers may bloom again -- with his reconciliation with death. Schubert, maybe more than anyone I can think of, played with harmony to create instantaneously shifting expressions of emotion, and the song captures psychological complexities in a very narrative way. Schubert, who had his own psychological struggles, expanded on this song's arc in his remarkably virtuosic variations for flute, so that each variation carries with it the narrator's internal struggle with yearning, his acceptance of winter/solace in death, and his vision of spring/hope for rebirth. The piece, being a set of variations, maps this psychological journey over and over, and, interestingly, manages to be more uplifting at its conclusion than the original song.

No one would think of Elliott Carter as a Romanticist, but I would, at least on the basis of Scrivo in Vento ("I Write in Air"), call him an Expressionist. The source of inspiration for Carter was Petrarch's Rime Sparse 212 ("Blessed with sleep, and content with languor.... I'm paid with tears and grief...") Again, unrequited love tortures the narrator of the poem, and the flutist/protagonist explores his manic struggles to find peace.

Carl Reinecke captures these struggles, too, in his "Undine" sonata. Undine, a water sprite, yearns for connection to the human world so that she may have a soul. Abandoning the water, she is raised by foster parents and falls in love with a knight, but must eventually choose between this love and her natural world in the sea. Water, here, paradoxically symbolizes both consciousness and rebirth as well as subliminal yearnings, again affirming life and its crazy mysteries.

JW:  You have worked with pianist Christina Dahl before. Tell me a little more about what it’s like to work with her.

JS:  Tina is brilliant and fun and funny. The creative process is a great adventure for us. I think she remembers anything she has ever heard, so she draws on a great wealth of anecdotes and allusions when we experiment with atmospheres and colors. She's greatly responsive, too, so even when we plan things, they don't always need to work exactly the same way twice -- there's a fantastically spontaneous feeling when we play together. And maybe the most inspiring thing I've taken from her is a sense that playing can be uncomplicated in many ways: "just get out of the way and sing" is a place that's easy to go with her.

JW:  Not only are you the Principal Flute in the Cleveland Orchestra, you regularly appear as a soloist and as part of chamber ensembles. I am a violinist, and the prospect of juggling that many commitments seems overwhelming to me, yet you seem to manage with such skill and ease. How do you balance all these different pursuits and still have time to practice?

JS:  I try to convince myself that all of the pieces of my puzzle are not so different from one another. If I learn how to satisfy some aspect of orchestral playing, in other words, I can usually somehow apply that to chamber playing, and vice versa. And I'm pretty much always practicing, I've noticed, whether it's in front of an audience, or in my imagination when I take my dogs out. I find that all this juggling doesn't really become easier with experience (though I'm glad it appears that way!) But it does become more and more fun.