Philadelphia Orchestra Principal Trombone Nitzan Haroz presents the first-ever PCMS concert to feature the trombone on Sunday, May 6. But Mr. Haroz is no newcomer to the chamber-music repertoire, having begun at an early age growing up in Israel with his harpist mother. While the concert on May 6 will not include the harp, it will feature pianist Gloria Kim and a second half of trombone repertoire. In our interview below, we discuss the afternoon's program, favorite chamber repertoire for the trombone, his musical family, and why he chose to play the trombone.

Jessica Wolford: The May 6 concert will be the first-ever PCMS concert to showcase the trombone. How do you think an audience that primarily experiences traditional chamber-music concerts with strings and piano should prepare for an evening of trombone repertoire?

Nitzan Haroz: I am so pleased and honored to be the first trombone player to be showcased at a PCMS concert! If you’ve never heard the trombone in a chamber music setting, be prepared to hear a very versatile instrument, capable of subtleties, colors, and lyrical qualities you didn’t think were possible with such an instrument.

JW: You have been principal trombone of the Philadelphia Orchestra since 1995 (minus two years with the Los Angeles Philharmonic). For you, what is the biggest difference playing with the orchestra vs. chamber music?

NH: The biggest difference for me (and for any trombone player) is that, in a chamber music set up, I get to truly express myself musically. In the orchestra we don’t have too many opportunities to play the melodic line, and when we do, the line is often quite short. It’s the strings and woodwinds that usually get the role in the orchestra to play the beautiful phrases while we sit in envy.

JW: You come from a musical family. Could you share about some of your earliest musical memories and your current musical influences? 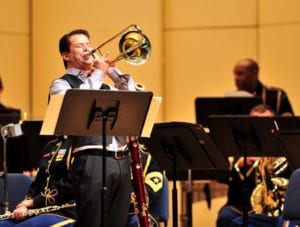 NH: It's true that I come from a musical family. I know for a fact that I heard music even before I was born. My mother is a harpist, and she would play the harp daily when I was in her belly. Some early musical memories are of my mother playing the harp with her brother, Micha Haran, on the cello (he was principal cello of the Israel Philharmonic for many years). She also played a lot with an amazing flute player, Michael Meltzer. Hearing them together was an incredible source of inspiration. It was like watering a young seedling.

JW: What are some of your favorite pieces to play (orchestral and/or chamber)?

NH: I love a large variety of styles and composers! With the orchestra I like to play exciting repertoire that has lots of brass, such as Mahler's 5th Symphony, Stravinsky's Rite of Spring, and Bartók's The Miraculous Mandarin... but also pieces like Bernstein's Chichester Psalms or Faure’s Requiem which have sublime musical moments. When playing chamber music, I like to play romantic music, Latin-influenced music, and and vocal music, among others.

JW: How/why did you choose to play the trombone?

NH: When I was almost 9 years old, I was flipping through a brochure with pictures of new brass instruments. I saw a picture of a few beautiful, shiny trombones, and I fell in love. I pointed at the picture and told my mother, "This is what I want to play." Without hesitation, she said okay and started to look for a teacher for me. The rest is history...

Nitzan Haroz performs with pianist Gloria Kim and an ensemble of trombonists TBA on Sunday, May 6 at 3 pm at the Benjamin Franklin Hall at the American Philosophical Society. For tickets and information, visit the concert page.