Susanna Phillips, soprano is one of today's most sought-after vocal performers. Entering her seventh season at the Metropolitan Opera, the 2010 Beverly Sills Artist Award winner shows no signs of slowing down, with performances in Mexico City, Japan, San Francisco, Chicago, Boston and more in 2014 alone. As we look forward to her all-Schubert recital with Eric Owens and Myra Huang on Tuesday, March 24 Susanna was kind enough to answer a few questions about her career, her native Alabama, and of course, Schubert.

Patrick Burke:  On January 9th you will be performing an all-Schubert recital with Eric Owens and Myra Huang. When did you first meet Eric and Myra, and how did this performance come together?

Susanna Phillips:  I first met Eric when he swept in and saved a concert performance of Lucia in my native Huntsville, Alabama. The bass who was scheduled to sing had to withdraw at the very last minute, and Eric flew down south and jumped in to replace him. He blew the roof off of the Von Braun center that night!

I have known Myra's playing since I was at Juilliard, but it was during Placido Domingo's Operalia competition in Madrid that we first collaborated. Now Myra and I regularly collaborate on recitals and chamber music concerts.

PB:  You’ll be closing the recital with Der Hirt auf dem Felsen, one of the most beloved Schubert songs. How do you approach a work with such a wide range of emotion–both your vocal part specifically and how this fits within the ensemble?

SP:  This is a song that I have sung for years, and each time I approach it something new emerges. It makes me chuckle that the soprano who requested the composition, Pauline Anna Milder-Hauptmann, had an affinity for yodeling. Perhaps my Bama background prepared me for that...

But in all seriousness, it is a very challenging piece vocally. The range is quite expansive, and the long lyrical lines of the slow section always challenge a singer's breath support and legato.

The clarinet has a quality of a vocal echo, which makes this song feel like a real duet. 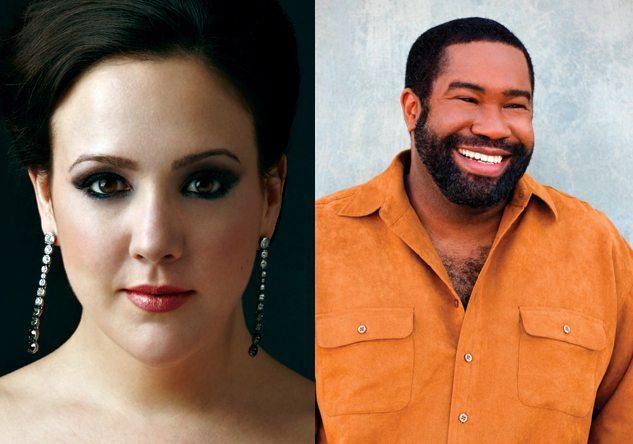 PB: As you’re preparing for such an intimate recital, you’re also in the midst of an incredibly busy opera season. In December you played Musetta in the Met’s La Bohème and shortly after your PCMS recital you will be returning to the Met as Antonia/Stella in Jacques Offenbach’s Les Contes d’Hoffmann. When you are preparing these works, does your approach to the characters you portray in the opera and in the lieder differ? How do you bring these characters to life?

SP:  Preparing a lieder recital is quite different to me than preparing an operatic role. In an opera you are one of many striving to tell a story. You portray one (sometimes more than one, but usually just one) character and tell one story from start to finish. With your other singing colleagues, the maestro, orchestra, stage hands, costume and wig people, together you can create a grand impact.

A lieder recital is similar to a pearl necklace–many small stories strung together to make a complete evening. With that comes much more flexibility for personal vision, and you can portray many different characters in one evening. Also, you collaborate with one pianist, sometimes a chamber group, but rarely more than 2 or 3 people, allowing for an intimate collaboration onstage.

PB:  Both you and Eric will be back in Philadelphia in early February, this time with the Mendelssohn Club of Philadelphia. Could you tell us about this performance and how you came to be involved?

SP:  I got to know my friend and colleague Koji Otsuki at the Marlboro Music Festival. He is a revered Bach scholar and suggested that I participate in this project. It will be a performance of Bach's St. Matthew Passion that is as close as possible to the performance conducted by Mendelssohn in 1829. The artistic director of The Mendelssohn Club studied the detailed performing notes found in Mendelssohn's copy of Bach's manuscript. I am thrilled to be a part of this concert, as it is this performance in 1829 that sparked the resurgence of Bach's music worldwide.

PB:  In 2010 you and fellow Huntsville, Alabama native Matthew McDonald co-founded the Twickenham Fest. Could you tell us more about the festival and how it came to fruition?

SP:  Well, this is a project very near and dear to my heart. My friend Matt McDonald is currently the principal bassoonist in the Rochester Philharmonic. He also happens to be a fellow native of Huntsville, Alabama. Huntsville is a remarkable community–innovative, smart, and supportive. Matt and I wanted to give back to the people who have given us so much over the years, so we started Twickenham Fest. In 2010 we decided to invite our friends and fellow musicians to Huntsville to play some concerts, and from there the Fest has grown exponentially each year. It has been thrilling to see the tremendous response from the Huntsville community and the musicians we invite to play there. For more information, check out www.twickenhamfest.org. Our concerts are always at the end of August, so come on down for some shrimp 'n grits with your Schubert!

For more information on Susanna Phillips, visit her website.