Last Tuesday I had the privilege of attending the Tokyo Quartet’s first PCMS performance this year, which was performed with just the amount of mastery and energetic grace that I would expect from this ensemble. I found their program — pieces by Haydn, Grieg, and Franck — particularly intriguing, especially the Grieg string quartet, a piece I had never heard before, but which immediately caught my attention. It was thrilling, and when I say “thrilling” I mean it. There was violence; there was passion; there was drama. Somewhat incredibly, Grieg managed to take a tiny piece of every emotion that has ever been felt by human beings and artfully turn it into music. It was like going on an adventure without having to leave my plush Perelman Theater seat. 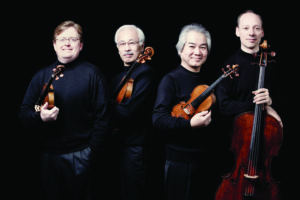 As the chords and harmonies invaded my thoughts, I was transported to scenes of epic battles, violent storms, and tragic heartbreaks. But it isn’t an entirely fantastical land. Oftentimes I was carried back to very real moments, memories that I carry quietly around with me without even realizing it. Suddenly, at the sound of the violin and cello harmoniously dancing together, I was transformed back into a child again, a five-year-old holding my Dad’s huge calloused hand, filled with a complete confidence that my whole world could and should be contained comfortably within that solid warmth. A couple passages later as the instruments violently pounded away at their notes in brutal unison, I was a sixteen-year old again, the day I realized my best friend was no longer my best friend, worlds crashing and ending around me, the terror that nothing would ever be the same again pervading my chest and lungs.

In previous posts I have focused on the incredibly powerful, binding influence classical music has over us, but I think this quartet was a perfect example of another important effect it can have upon us. It is, in a certain sense, whatever we want it to be, or rather, it affects each of us in an different and intimate way. We all gather together in this space to sit and watch the same musicians interpret a certain piece of music for us, and yet at some point we all leave the room and have our own separate, private interaction with the piece. And then at the end, we come back, our toes touch the ground again, and we stumble out into the lobby, eventually regaining enough awareness of ourselves to acknowledge the other people around us. We trade impressions, perhaps pose a couple criticisms, ask if so-and-so thought the same about such-and-such passage, but in the end there isn’t always a way to put what we just experienced into words. Is this not the paradox of humanity:  the need to share common feelings and experiences with those around you, and yet the inability, ultimately, to communicate fully with one another? I don’t mean this to be depressing or overly thoughtful, but I think this is ultimately the reason that music continues to fascinate us. For a moment there is a beautiful balance between our togetherness and our apartness. We may not have the ability to experience exactly the same thing as the person sitting next to us, but at least we can have these different experiences together.