After PCMS’ opening concert this season with Musicians from Marlboro, we received the following from a teacher who brought a group of her students for the evening.

I just wanted to thank you again for the tickets to the concert last night. The students had a great time and it was a new experience for them. One of my 7th grade students actually surprised me when she said that she had never heard of Beethoven. This was a much needed field trip for them. Thank you so much again for making it possible to give my students this experience. — Tanya L. Powell

Impact is a hard thing to measure. This is especially true when the long-term effects of a momentary experience like this one may last well into the future. While quantitative data is important in understanding the reach of a program into a community, the real value of art can extend far beyond what numbers can prove. So we collected a handful of summaries, pictures and quotes that define the interaction people of all ages had through PCMS’ Education and Outreach Program. It is important to note that many of these activities take place to support the work of the organizations and teachers throughout Philadelphia who are also committed to the mission of opening opportunities for students everywhere. Similar to the nature of chamber music, our work is collaborative–connecting people and amplifying the value of this art form around the city. 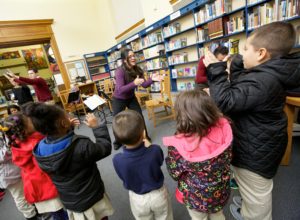 PCMS expanded its partnership with the Free Library of Philadelphia with a pilot program this year, bringing chamber music to students in after-school programs at two neighborhood branches–Wyoming and Lillian Marrero–and to over 300 children at the central branch. The Dalí­ Quartet gave a grand tour of Latin chamber music, involving the students in clapping its complex rhythms and listening for how themes were passed between each artist as they played. 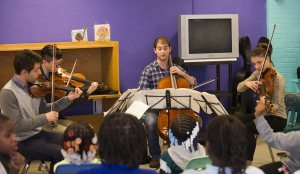 Through Music for Food, a musician-led initiative to fight hunger, the Dover Quartet raised funds at their concert in December for the Weavers Way Community Programs in Germantown. The previous day, the Quartet visited the Stenton Family Manor, taking part in activities with the kids and then performing for them and their parents. It was encouraging seeing a rising Quartet take the time to give back to their community–sharing their music and connecting with kids.

What made [the Curtis Chamber Orchestra’s] performance so exciting for me was sitting in the center of the first row with my knees practically touching the wall of the stage. I literally felt like I was on stage with the orchestra! To listen to the tone of the instruments and observe the expressions and body movement as the musicians perform has really inspired me and given me a vision of what I can someday be with practice and determination. — Amelia Gormley, Temple Music Prep

A View from the Inside 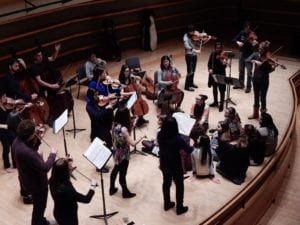 PCMS also launched an open rehearsal program for area middle and secondary schools. During ECCO’s dress rehearsal before their concert in March, the ensemble invited a group of 10 high school students from Gwynedd Mercy Academy to join them on stage and sit in the middle of the group. One of them summed up their experience afterwards:

The rehearsal was a glimpse into the professional music world, and a good one at that. I can appreciate their comments and techniques as a string player, and being on stage was out of this world! I heard so many girls saying how it was their favorite event this year, and what a thrilling experience it was. Their energy and enthusiasm is something rare and exclusive.  Thanks so much for letting us see that! — Addie Olsen

Twenty-two artists and ensembles spent extra time during their stop in Philadelphia to work with aspiring music students. Students worked one-on-one with masters of their instrument, providing the technical, musical and historical insight of the music they brought to perform. 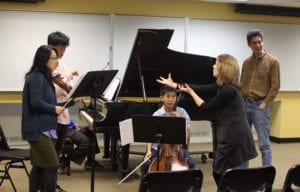 Under the Daedalus Quartet's guidance, a piano trio from Temple Prep’s Music program worked to express both the elation and madness that Shostakovich expressed in his Op. 67 masterpiece. They gave the students the technical tools to navigate the musical challenges in achieving the balance in this tension. 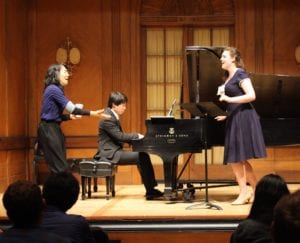 Prior to her anticipated recital with Dorothea Röschmann, Mitsuko Uchida spent over two hours with Curtis Institute students, sharing her insight on the Schumann lieder she would be performing with the German soprano the next day. In addition, she spoke of the importance of developing one’s artistry through cultural experience–encouraging the students to read, travel and taste the culture of the music they perform. 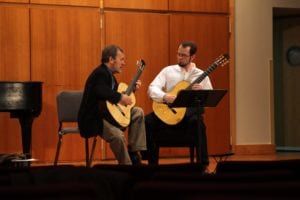 With subtle changes and attention to the musical line, Nigel North guided Temple University guitar students in communicating the musical narrative of Bach’s suites. He emphasized the need to hear each harmonic voice and how their movements influence the direction of the music.

Working with one of the Play on Philly orchestras, Time for Three demonstrated the affect that their bow speed, weight and placement on the strings has on the color and timbre of the sound. Then, experimenting with various combinations of these bowing techniques, they helped the students choose which would reflect closest to what was called for in the music.

When the Danish Quartet came off stage after their February concert in the Perelman Theater, they exclaimed, “That was the youngest audience we have played for in the US!” This remark is a testament to the success of our Unlimited Student and Young Friends Passes. After six years, the program has grown to include hundreds of members who attend an average of eight concerts. We have also begun to see Young Friends continue their engagement with PCMS as subscribers to the series after aging out of the program.

As a newly-minted owner of an Unlimited Student Pass, I would like to thank you and your organization for such a wonderful program!! I went to my first concert last night–Jonathan Biss' stunning piano performance–and it absolutely made my evening! What a beautiful and moving experience. (As a side-note, I was in a box on the first balcony, which was fabulous! Thank you for that great view and proximity to the performer.) — Miriam Stanton, University of Pennsylvania

PCMS also extended its partnership with Settlement and Temple Prep’s programs for advanced students: the Sounds of Young Philadelphia Leadership Series and the Center for Gifted Young Musicians. Participating students received a free Unlimited Pass–offering access to all 60 PCMS concerts–and wrote reviews of the performances they attended, giving voice to their concert experience and its connection to their training as musicians.

Scholars, dramaturges and composers from the Juilliard School, Curtis, UPenn, Peabody, NYU, Temple, Haverford, and St. Joseph’s University gave 22 pre-concert lectures this season. Richard Freedman, a Professor of Humanities at Haverford College, expressed how “lectures are an opportunity to connect with fellow listeners, helping people hear things they might not have otherwise.”

We recognize that PCMS' greatest assets are found in the collaborations and partnerships we forge with many individuals, organizations and businesses around the city. Besides broadening our impact in the community, these relationships are strengthening the quality of our collective efforts–the very thing PCMS has espoused for 29 years.

PCMS is grateful for the support we receive through the Lois and Julian Brodsky Education Fund, the Cassett, Connelly and Dolfinger-McMahon Foundations, the Hirsig Family Fund, and countless donors, who have made over 50 education and outreach activities possible every year.

The Science of Music