MA CHERIE: My mother and the Maestro

About the Author: Bettina Hoerlin is a PCMS Board Member and author of the recently released book, "Steps of Courage: My Parents' Journey from Nazi Germany to America"

With Pablo Casals' 135th birthday fast approaching, I am reminded of the extraordinary friendship between this acclaimed cellist and my mother, Kate. They first met in Munich in 1921, he already famous for his wondrous playing, and she a 22 year old, newly wed to an eminent music critic. The times were joyous and vibrant, Munich a center of the musical world. All of that changed in 1933 when Hitler became Germany’s chancellor.

On June 30, 1934, Hitler rounded up over 90 people and summarily executed them. He justified the purge, called the Night of the Long Knives, by insisting it was necessary to save Germany from insurgency and chaos. Among those murdered was my mother’s first husband, Willi Schmid. Months later the Nazis confessed they had assassinated him by mistake. It was small consolation to my mother and her three young children.

Upon learning of the death of Schmid, Casals was deeply shaken. This and subsequent persecutions, foreshadowing the horrors to come, led to Casals’ decision to no longer concertize in fascist countries...or ones that recognized fascist regimes. The Munich days were over. 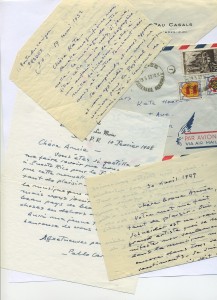 A collage of Casals letters to my mother

It was not until 1937 that my mother heard Casals play again. By that time she had fled Germany, mistakenly thinking that she and her children would be safer in Austria. Casals had invited her to a concert he was giving in Vienna on December 5. Sitting in the concert hall next to another old friend, the conductor Wilhelm Furtwaengler, both of them were spellbound by Casals’ playing. “It was heavenly,” she wrote the next day, “I was with Casals for several hours afterwards -- he possesses a wonderful sensitivity and a deep tenderness that emanates from infinite goodness.”

The person she was corresponding with was the man who would become her second husband: my father. Herman Hoerlin was a physicist, a world record-breaking climber and fervently anti-Hitler. In a rare exception to Nazi racist laws that forbid marriages between Aryans and Jews, my parents wed in 1938 and fled to the United States. It was another fourteen years before my mother saw Casals again, although they continued to correspond.

In 1950, Kate received a joint letter from Casals and Alexander Schneider saying, "You must come here next year -- we both adore you." It was postmarked from Prades, a small French village where Casals had been living in seclusion since he left his native Spain in protest against Franco’s tyranny. Schneider (known as Sasha) of the Budapest Quartet had persuaded the great Maestro to play in public again on the occasion of the 200th anniversary of Bach’s death. In the summer of 1951, my mother traveling with her dear friend, Eva Feuermann, the widow of another celebrated cellist, was once again among her treasured old friends. 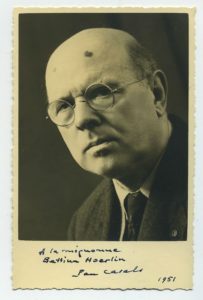 A photo of Casals signed for the author

Music had become the stream of continuity in my mother’s life, transcending time and place and sustaining her through tragedies and upheavals. In subsequent years she attended the Casals Festival in Puerto Rico as well as the Marlboro Music Festival for many summers, timing her visits with the presence of Casals, who brought his enormous talents and passion there from 1960 to 1973.

By that time, my family had moved to the Atomic City of Los Alamos, New Mexico, quite a distance from the hills of Vermont. On one of her trips east, the Maestro had quietly asked her, “Ma Cherie, why does your kind and good husband make bombs?” The winner of the U.N. Peace Medal could not reconcile that my father could work for disarmament while employed by a huge war machine. “Ma Cherie” carefully explained my father’s quest for enforceable bans on high altitude nuclear testing.

I am not sure whether this was convincing to Casals. My mother once described Casals as “…one of the few men who never made a compromise.” Whether that was good or not is debatable. What remains uncontested is how much my mother’s 50 year relationship with him was precious to her and, I think, to him. This December 29, Casals’ birthday, music lovers should spend a moment celebrating this immortal cellist and remarkable man.