On Friday, February 18th, the Daedalus Quartet will present the Philadelphia premiere of Richard Wernick's 8th String Quartet.  I asked the Quartet's first violinist, Min-Young Kim, to speak about working on this piece. 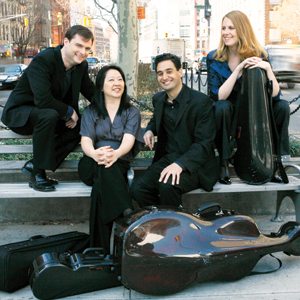 Min-Young Kim: Raman (cellist Raman Ramakrishnan) had first met Dick at Marlboro when he played his 6th quartet, and the Daedalus met Dick with the same piece which we performed on a PCMS/Network for New Music concert that was celebrating Dick's 75th birthday.  We loved performing that piece and working with Dick, and the idea of the 8th quartet emerged out of that experience.

The commissioning of the 8th quartet is quite an amazing story of coincidence and how small the chamber music world can sometimes be, and also a celebration of music in the public schools.   Raman and I are coincidentally both from East Patchogue, NY on Long Island and went to the same public schools for most of our childhood.  We were awarded the Guarneri Quartet Award for a chamber music residency, which enabled us to deepen our work with hometown school string programs, as well as several other schools in eastern Long Island.  One of those schools was the Bay Shore High School, and it so happened that in 1962, Dick was a Ford Foundation composer-in-residence at that exact school.  When we were in the orchestra room of Bay Shore High School in the fall of 2009, I was so struck by the coincidence that I spoke to Susan Barbash about how Dick had worked with students in Bay Shore and our connection to Dick.   I mentioned that Dick had already begun writing the 8th quartet, but we were still looking for funding for the commission.  And fortunately for us, Susan suggested that the Bay Shore Schools Arts Education Fund and the Islip Arts Council commission the work for us.  The 8th Quartet is in memory of Howard Koch, who was an amazing teaching force and source of inspiration in Bay Shore and much of Long Island, and Dick worked with him closely during his time in Bay Shore.  It's really a wonderful story and we feel lucky to be a part of it.

MC: What has the process been like working with Wernick as he wrote the piece?  Did you just see the final draft?  Or were you asked to give him feedback?  Were any changes made after the first playthrough?

M-YK: It's wonderful to be able to work with a great composer.  Before the world premiere in November, we worked with Dick, and then he made some slight changes after the first performance.  But basically, he was very clear with his notation and how he wrote the piece in terms of conveying what he wanted the piece to sound like.  And we try to communicate that as best we can.

MC: In your words, how would you best describe Wernick's 8th Quartet?  In the process of rehearsing this piece, what have you learned about the piece that might help audience members understand the music more?  What would you highlight that the audience might listen for when they come to this concert?

M-YK: I think Dick really understands how to write for quartet.  There's a wonderful soulful quality to Dick's music that we find very satisfying to play.  The slow movements of this piece - 2nd and 4th-  highlight that especially.  The 3rd movement shows Dick's great sense of humor, and the 1st  movement begins like a stormy perpetual motion of fast notes (16th notes) with dramatic pauses and interruptions and dramatic pauses.  It's a wonderful piece!  I hope that the audience will feel the emotions and characters that we try to bring alive from his music, especially through how we play off of each other or with each other, or how one of us may continue where another leaves off.  Dick loves counterpoint (as do we!) and we try to highlight how our lines relate to each other.

Soovin Kim (Johannes Quartet) Responds to Questions: Why this repertoire? Why now?

What underlies a great performance?