Emerging Voices was born out of Nicholas Phan’s pressing desire to understand his own history, to depict our collective identities as Americans, and to deepen our capacity to empathize with the experiences of others.

In his first journal entry for the project, the tenor and project curator testifies to the connective power of art song and the personal experiences that inspired Emerging Voices.

In the summer of 2003, I had the honor of representing the United States of America at the BBC Singer of the World competition in Cardiff, Wales. The competition is a sort of operatic Olympics, with singers coming from 20-25 nations to compete in the final rounds for a handful of prizes. In addition to the coveted top prize of being crowned “Singer of the World”, the other main prize was the “song prize”, which was won not by singing with giant orchestral forces, but by performing in the intimate, cabaret-like format of a vocal recital with piano. Rather than competing by showing off our athletic, larger-than-life operatic abilities, the song prize mini-recitals were a chance for us to showcase our individual artistry and give both the panel of judges and the audience a more detailed glimpse of our artistic personalities. When thinking about our mini-recital programs for the song prize, we were strongly encouraged by the BBC to choose songs from our own countries. Faced with this request, I found myself more artistically confounded than I had ever been in my life.

Growing up in Michigan, the son of a Chinese father who emigrated to the US after growing up in Indonesia and a Greek-American mother raised by parents who emigrated to Indianapolis, I was more keenly aware of my Greek and Chinese heritage than of being an American. Raised in the Greek Orthodox Church, I attended Greek school once a week and began learning a second language (modern Greek) from the age of 5. We celebrated Easter at a different time of year from everyone else at school who celebrated the holiday, and learned Greek folk dances. We celebrated the Lunar New Year each winter with brand new outfits and red envelopes of cash. At school, looking around at my peers, I was surrounded mostly by people who were either white or black. I didn’t see many Asian or Latino people, nor many kids of mixed race. What I did see was that absolutely no one looked like me. 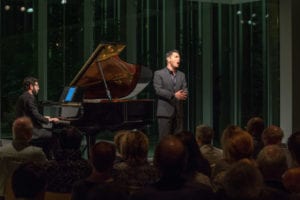 For most of my fellow Singer of the World competitors, finding appropriate “songs from my country” was an easy task. For those who were English, Welsh or Irish, there was a treasure-trove of folk-song arrangements by composers like Britten, Grainger, and Vaughan Williams to choose from. There were plenty of Lieder by German and Austrian composers for their representative competitors. The Greek and Turkish singers had a similar easy choice of folk-song arrangements by respected composers from their respective countries. As the American representative, I struggled with this programming request. My initial instinct was to look to Copland’s Old American Songs arrangements, or to search for arrangements of songs like Shenandoah or those of Stephen Foster, but somehow this didn’t feel right.

Despite having been born in the US and living most of my 24 years in southeastern Michigan, this idea of identifying myself as an American felt brand new. I didn’t feel I had the right to sing songs like Simple Gifts or At the River – as much as I loved them – because I wasn’t a white American. For similar reasons I didn’t feel comfortable singing arrangements of spirituals. Making choices from a place of fear and discomfort, I shied away from all my initial instincts and ended up turning to a song by John Musto – an art song called Litany from his cycle of Langston Hughes settings, Shadow of the Blues. Here was a version of America that I felt comfortable representing: a diverse America with many identities – an America that was still figuring itself out, in a way.

In the end, I lost the competition, walking away from Cardiff with only a commemorative t-shirt and some complex thoughts about my programming choices weighing heavily on me. My discomfort about my American-ness persisted for many years. It would be 12 years before I found the courage to program Copland’s Old American Songs in recital. Strangely, I had no qualms singing the music of other nations. I never once flinched when programming my debut album just a few years after the competition: nearly one-third of that album, Winter Words, was comprised of English folk-song arrangements by Benjamin Britten.

Two realizations have remained with me since that experience in 2003: One, that song is a powerful avenue for the expression of identity. Two, the complexity of identity: something that seems so straightforward and easily identifiable on the surface is actually a nebulous and constantly shifting thing with many layers.

A couple of years ago, the Philadelphia Chamber Music Society approached me to develop a project exploring art song. I chose very quickly to focus on the influence of Paris at the turn of the last century – and I thought initially that was simply because it was an area of interest on my mind at the time. I had been immersed in examining and recording the music of Debussy and Fauré when we began these discussions, and looking at the proposed timeline of the project, I also realized that the 100th anniversary of the signing of the Treaty of Versailles would be fast approaching. The political and cultural parallels between that time and the present day made an examination of that period of history seem especially pertinent. Yet, as discussions progressed and my research and programming developed, I began to understand that the real draw for me to this subject matter was, in fact, much more personal. 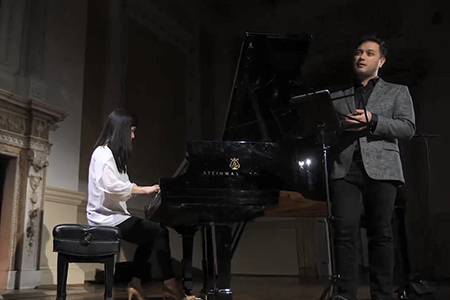 At that time, I was reading in depth about how Debussy and Fauré were looking to define a French musical aesthetic distinct from the prevailing Austro-German one that dominated Europe at the time. I was also learning about the large numbers of composers who were going out into the field to collect folk music during the period, and was discovering how Nadia Boulanger encouraged her students (many of them American) to identify and develop their own unique voices. All of this highlighted for me just how volatile the nature of identity was during those years; how the trauma of World War I revolutionized the concept of what it meant to call oneself European; and how Americans were beginning to define an identity of their own. People who once identified as Austro-German were suddenly thinking of themselves as Czech, Slovak, or Hungarian, or a whole slew of other nationalities. Soldiers who thought of themselves as heroes fighting and dying for their countries were horrified to discover the ugly realities and costs of war and began to feel more like expendable pawns than knights of valor. In extreme cases, some even began to wonder who the real enemies were and why. Nadia Boulanger was asking her students to define what the American sound was, and this was a question that most of these young composers were grappling with for the first time.

These constantly shifting sands of identity - as well as the strong desire to express them – are things that resonate deeply with me. I am Greek. I am Chinese. I am biracial. I am gay. I am a musician. I am an American. I am the child of immigrants. I am a performer. I am a presenter. I am a teacher. These are all different aspects of my identity, and in combination they affect me in two distinctive ways. On the one hand they enable me to be a chameleon of sorts; I am able to don various hats and can find common points of interest and empathy with just about anyone. On the other hand, I have always felt like an outsider looking in; I have never been just one of these things, and being a mixture of all of them is what makes me different. Musically-speaking, classical music has always felt like the music that best expresses my identity; however, as an Asian-American, I can’t really lay claim - from an ethnic or national standpoint - to any of the music I perform. A singer with my last name performing the works of Britten, Debussy, Schubert, or even Simple Gifts feels radical to me. Yet it is the ultimate expression of who I am.

With the signing of the Treaty of Versailles, the world was divided into smaller and smaller boxes. Larger nations were carved up into many smaller ones. There were more boxes to fit people into. However, waves of nationalism are tricky things. They focus on division and difference. Somehow, for me, singing songs has highlighted the empathic experience music and poetry can provide. In song, there is room for those of us who check the “other” box on demographic surveys. Song gives us the opportunity to find common ground in each other’s self-expression, creating a path for peace and harmony, as opposed to division and strife.

The Life of the Poem in Song