On the Origins of the Lute

In anticipation of Hopkinson Smith’s upcoming performance this Thursday, I thought it would be a good idea to explore the rich history behind his instrument, the lute. It is not often that one has the opportunity to attend a lute concert these days, but this instrument is the great, great grandfather of many of the string instruments with which we all are so familiar.

At the risk of sounding like one of my professors, I must begin this short study with a one of those annoying questions that at first seems terribly obvious, but becomes more and more complicated as you try to answer it. That is:  what exactly is a lute? Historians can’t seem to agree on this point, probably because what we think of today as a lute didn’t go by that name until the twentieth century. Like all instruments, it has evolved pretty dramatically over the ages, and while we can confidently trace its various transformations back to the sixteenth century, things before then are a bit, well . . . foggy. There are so many incarnations of this instrument, from the graceful, oval-shaped instrument we find in Egyptian paintings to the modern, almost tear-drop shaped instrument and everything in between. Deep bellied, shallow bellied, 12 strings, 35 strings — any incarnation you could dream of has probably existed. 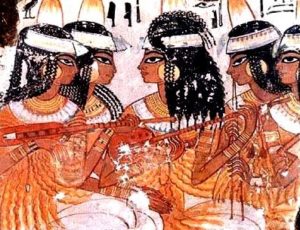 The lute as depicted in an Egyptian wall painting

Historians and lute enthusiasts seem to have narrowed the argument down to one main point of contention over the relationship between the short-necked lute (which can be traced back to Near Eastern cultures during the seventh century) and the long-necked lute (which has origins in ancient Egypt around 1300 BCE).  The short-necked lute is much closer to our contemporary version of the lute, but there is an unmistakable similarity between the chordophone depicted in Egyptian art (see photo above) and the instrument that shows up in the Middle Ages. Did the short-necked lute evolve from its long-necked friend from the neighboring continent? Are they perhaps cousins? Or are they not related at all? Smarter beings than I have argued both sides equally unsuccessfully, so I will leave the question up to you. 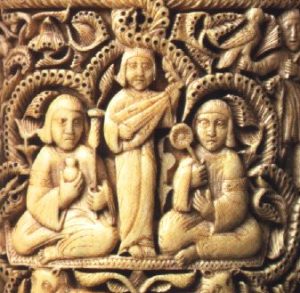 Fuzzy possible Egyptian origins aside, it is agreed upon that the Bulgars (a people usually associated with slightly more energetic activities than the study of music) brought an early version of the short-necked lute called a Kabuz to the Balkans where it migrated to Spain by means of the Moors, who called their instrument an Oud. The origin of the name ‘lute’ is derived from this word, which in Arabic is ‘al-Ê¿Å«d’ or  literally translated, ‘the wood’[i]. By 1500 the Spanish had come up with the vihuela de mano, an instrument tuned like the lute, but shaped slightly differently.

After 1500 the lute was distributed throughout Europe in various shapes and sizes. By the end of the Renaissance there were seven different sizes that ranged all the way to the ‘great octave bass’. Most medieval and Renaissance music was improvised, so little sheet music survived. During the Baroque period, the lute became more of an accompaniment instrument until it was replaced by the harpsichord and later the piano.

Whether or not you believe that the lute came from the Egyptians or the Moors, I predict you will enjoy the beauty and excitement that Hopkinson Smith has in store for you during his “Renaissance Evening” program on Thursday at the American Philosophical Society.