The story behind an instrument is often overshadowed by the story of the artist who performs with it.  People usually come to hear an artist they love, not the instrument.  But it could be said that an instrument accounts for half of the music making that takes place.  For as important as the decades of study and practice that every musician undertakes to hone their craft, their medium is just as finely fashioned to provide a clear channel for expression.  Unfortunately, too little is often communicated to an audience about these instruments.  The four Stradivarius instruments the Tokyo Quartet perform with have just as interesting a story as the artists that play them.

The violins, violas and cellos that Stradivari made are among the most famous and only trade hands every once in a blue moon for millions of dollars.  This price range puts them out of reach for even the most gifted artists.  So to bridge the gap, foundations and individual patrons have acquired many of them in order to loan them to well-deserving musicians.  The Nippon Music Foundation is one such organization that currently owns seventeen violins and cellos along with the “Paganini Quartet.” 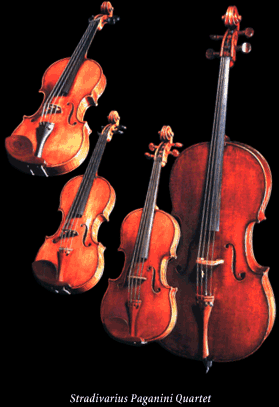 This quartet of instruments — two violins, a viola and a cello — are forever united together by their history as a set.  The legendary Italian violinist and composer, Niccolo Paganini (the quartet’s namesake) acquired each of the instruments individually in the early 19th century.  Each had its own personal name:

After Paganini, the quartet was divided and changed hands numerous times before being united again by Emil Herrmann, a prominent dealer and restorer of violins in New York City.  They were purchased by Anna E. Clark for the formation of a new quartet in 1946 — the “Paganini Quartet” — this time taking their name from the instruments they played.  When the quartet disbanded in 1966, it was established that the set would never again be separated.  After a short stint with the Cleveland String Quartet, the Nippon Music Foundation bought the instruments and loaned them to the Tokyo String Quartet.

One may wonder why a musician would desire a Stradivarius over another instrument, besides the appeal of playing an instrument from such a famed luthier.  In a conversation with Colin Eatock (of the Houston Chronicle) last year, the Tokyo’s first violinist, Martin Beaver, explained:

I would say, first and foremost, that because the instruments all came from the same maker, it makes it possible to achieve a really nice blend of sound. Strad instruments will afford the individual player a wider palette of colors. That means we can more readily achieve different and special colors — colors that you might not get from lesser instruments.

Over the years, we’ve all had to come to terms with the instruments and their particular personalities, and make them work for the quartet as a whole. That can sometimes be a bit of a challenge. But it’s nice to know you can play the softest pianissimo, and it’s still going to be heard at the back of the hall, no matter how big the hall is.

Cellist Clive Greensmith had a slightly different take on playing a Stradivarius in his conversation with Jason Serinus in 2003, four years after he joined the group:

I think cellos of this caliber are not ideal, because they often have very strong personalities of their own. I really felt like I was in the driver’s seat when I played my own cello. If I wanted to crescendo or dimuendo, make a nuance or a color or change the pacing, it was all me. With the Strad, I had the feeling that it was playing me. The sound was so vibrant and so strong, especially when playing softly, that sometimes a note would pop out in a certain range. It’s hard to play. To have to coax the sound out has been quite an adjustment.

People have sometimes criticized Stradivarius instruments for not being particularly ample or rich sounding right under the ear. But when one goes out into the hall, they sound totally different. So there’s an element of trust in there. Now when I go back and play other cellos, I feel like I’ve learned a lot. Playing the Strad has changed my playing.

Whatever the sentiment, Stradivarius instruments have remained “seductive and extremely transparent,” Greensmith said elsewhere.  And in the hands of such an illustrious ensemble as the Tokyo Quartet, the sold-out audience at their PCMS concert on Sunday, May 6th, will hear another great masterpiece performed - the “Paganini Quartet.”  One can only wonder where the set will travel next after the Tokyo bids farewell next year.

PCMS Trivia: Which work has been performed the most times in our 26-year history?