A Closer Look at Booking a 60+ Concert Season

With the 12-13 PCMS subscription process now in full effect, I have been approached by a number of patrons inquiring, "How do you and Tony go about organizing and putting in place a typical PCMS season?" When I respond that the answer is quite involved, several of the same patrons urged me to blog about this topic. So here goes...

In order to fully understand how Tony Checchia (Artistic Director) and I go about putting together a typical PCMS season, I would suggest traveling back in time to when you were a child. Think back to one of those days when it was raining outside and you were unable to go out and play. Instead your parents suggested the idea of doing a giant puzzle to pass the time. With no video games, computer or a TV in my house (until I was a teenager) I would eventually be convinced that putting together the 500+ piece puzzle of the map of the world was a “great” idea. As we all know, when it comes to putting together a large puzzle there are some standard strategies, e.g. find the corner pieces first, then put together the edges, then attack the middle.

Where am I going with my childhood puzzle story, you may be asking? Well, putting together PCMS' 60+ concert season each year is in many ways quite similar to completing a large jigsaw puzzle. Tony and I begin by establishing a set of primary guidelines. For starters, we usually block out 24 chamber concerts, seven piano recitals, three string recitals, three vocal recitals, three wind concerts, five special events, and five Musical Fund Society concerts. That brings us to 50 concerts right off the bat, and then the final 10+ events can be anything:  extra piano recitals; concerts to promote younger artists; additional guitar recitals; or special projects such as next season's Rossini Mass). Before we know it, Tony and I are at 63 to 65 events and wondering what else we can squeeze in or who we may have overlooked. 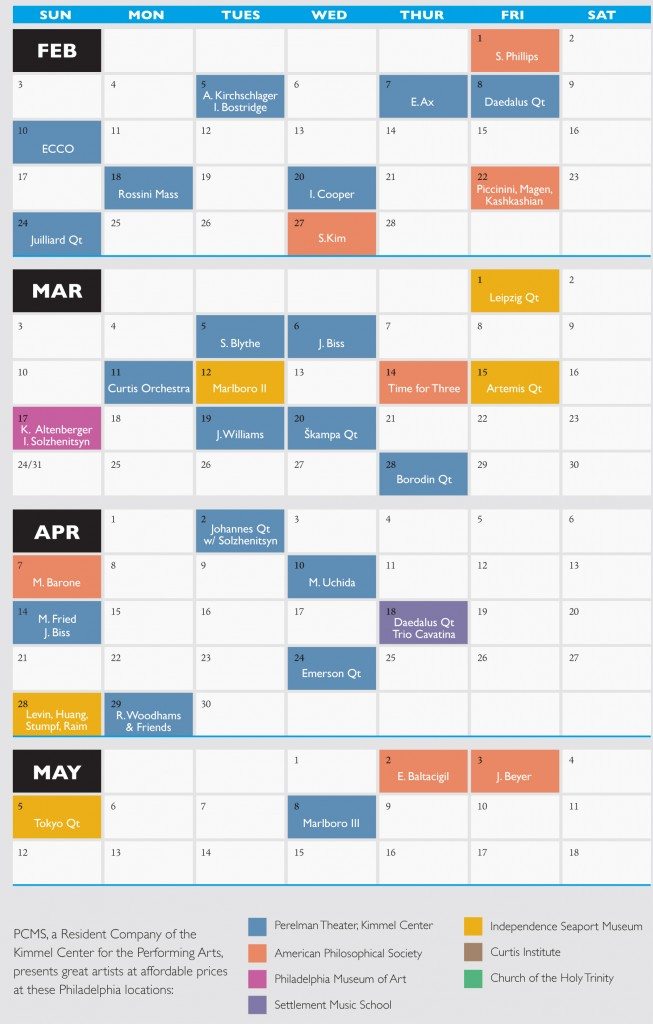 Once we have this basic framework in place, the next conversation Tony and I have revolves around which artists PCMS has presented in recent years that we (Tony, Philip, Bradford, Brian, Jacob, myself) want to have back, and also which artists/ensembles have generated real positive public buzz (Tony and I always take your feedback/thoughts  into consideration).  For those of you that are longtime PCMS attendees, you know that we try to build relationships with certain artists and ensembles by bringing them back as often as we think makes sense. Having a 60+ concert season does afford us some flexibility to present artists more often than some other series in the country.

However, returning artists only make up 60-70% of the musicians on our series. Tony and I are always striving to introduce PCMS audiences to the next wave of young musical stars or artists who have international careers elsewhere but who have rarely visited Philadelphia. A few examples in recent seasons include Quatuor Mosaïques, Pepe Romero, Bernarda Fink, and Hopkinson Smith, to name a few. Naturally we are approached often by managers and patrons suggesting new artists for our series, and Tony and I do our best to add every name to the overall list that we revisit each spring. We do our best not to overlook anyone, but even with 63 to 65 concerts each season, unfortunately there are going to be artists/ensembles that we cannot find space for.

Once we have a general idea of the 60+ artists/ensembles making up the season, Tony and I then discuss venue options, and if we have dates available, we look at when it would make the most sense to present certain artists. For example, we try to avoid having all of our piano or vocal recitals in the fall or on the same day of the week. More often than not, especially with European artists, they are only touring for a small window of time, and thus PCMS tries to maintain the utmost flexibility by presenting concerts seven days a week (although we typically avoid Saturdays). We also try to take Mother Nature into account. She can be most unpleasant in January and February so we avoid loading up on concerts in those months. And, of course, we look at trends from recent seasons. There are numerous factors to consider; for example, we have less time to promote events in the early part of the season, and concerts later in the season often benefit from extra PR.

Once Tony and I carefully consider all of these steps, there is an entire secondary part still to come, including fee negotiations, determining programs, arranging travel, booking hotels, and confirming the rehearsal process. I feel I have run on long enough in this particular blog, so I shall leave it up to you whether you would like to learn more about this part of the booking process. Provided enough patrons post responses below or email me directly, I promise to go into more detail about this part of this in a future entry.

In the meantime, I hope that this has helped to shed some light on the steps involved in booking a typical season at the Philadelphia Chamber Music Society. As I said above, I look forward to hearing your feedback and answering any questions you may have.