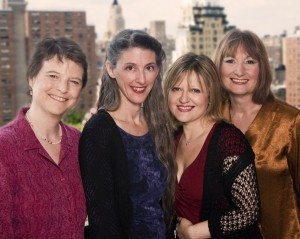 Anonymous 4's concert on Friday, December 14th marks the vocal quartet’s twelfth appearance on our series since their debut in 1998. For an ensemble that has been performing for over a quarter century, we were interested in asking them about what has kept them motivated in their music-making over the years.  Susan Hellauer, one of the ensemble’s founding members, handles the group’s medieval music research and spoke to us about this year’s program, what their appearance in Philadelphia means to them, and what continues to inspire their music.

Erik Petersons:  For your tour this year, you have put together a program entitled A Virgin Unspotted: Medieval and Traditional Christmas Songs for Mary.  What draws you to the music of the medieval period, and what sets it apart from other eras?

Susan Hellauer:  The voicing of medieval polyphony (12th - 14th century) is ideally suited for an ensemble of nearly-equal voices. The concept of SATB choral writing is much later–late 15th/early 16th century, really, with the advent of music printing.  The harmonic style of medieval polyphony is not completely alien to our modern ears, but it's not completely familiar either.  For us, this creates an ideal balance of music that is both accessible and surprising or different. And this is the repertoire that Anonymous 4 “grew up” with; it's the material we used to create our own personal sound and style, which we've expanded to Americana, with our American Angels and Gloryland programs, and contemporary music commissioned for us, represented on AVU with “the wood and the vine” from David Lang's new work love fail. We've also included several pieces from our new medieval project, Marie & Marion: Motets and Songs from the Montpellier Codex (c. 1300).

EP:  Your concert in December will be your twelfth appearance with PCMS.  What comes to mind when you think about performing in Philadelphia?

SH:  What comes immediately to mind is that the Christmas season does not begin, for us, until we've sung in Philadelphia. Your audience feels like family to us–they decorate the “house” and invite us over for a conversation of music and love in a venue that is inevitably ideal.

EP:  Anonymous 4 has been performing for over 25 years now and is still going strong, continuing to inspire audiences with your fresh, energetic approach. What do you do as a group in order to stay motivated and inspired?

SH: Even though we don't develop programs at the same pace we once did, we still always have programs in various stages of development, and we get excited about all the different stages:  initial bouncing around of ideas; creating a theme and zeroing in on a repertoire; finding and singing the music together; then making the program, learning the program, premiering the program, recording the program, touring the program. It's like having kids of different ages, going through their different stages of life, and always surprising you. If someone were just handing us music to sing, and we were not in on all the steps of the creative process . . . well, that wouldn't be Anonymous 4.

Anonymous 4 appears on Friday, December 14th at 8 PM at the Church of the Holy Trinity.  For tickets and information, visit the concert page or call the PCMS Box Office at 215.569.8080.