The Escher Quartet is making its PCMS debut this January. Cellist Brook Speltz joined the Quartet, now in its 11th year, in the summer of 2015. He came to the Quartet after three summers at the Marlboro Music Festival and performances with groups such as SHUFFLE Concert and the East Coast Chamber Orchestra, and on the Omega Ensemble Series (just to name a few). I spoke with Brook about this upcoming concert, teaching masterclasses, touring, his musical family, and upcoming projects.

Jessica Wolford: The performance on Sunday, January 15 features the Anton Bruckner String Quintet in F Major with Samuel Rhodes, viola. Could you discuss the Quartet’s relationship with Mr. Rhodes and how this collaboration came about?

Brook Speltz: Bruckner's Quintet is a relatively rarely-performed work that is mostly known for its incredible Adagio movement. We had the pleasure of performing the piece with Eugene Drucker of the Emerson Quartet back in October, so we look forward to taking another look at the piece with Sam. 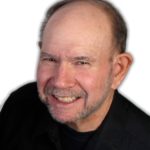 Samuel Rhodes was, of course, the violist of the legendary Juilliard Quartet for many decades and serves on the faculty of the Juilliard School. It was in his capacity as a teacher at Juilliard that I first met him. He was my coach for a Beethoven Quartet, and of course his knowledge and passion for the piece was incredibly stimulating. A few months later, I attended Marlboro for the first time, and one of my first groups was Berg's Lyric Suite with Mr. Rhodes on viola! One of the hallmarks of Marlboro is the working relationship between the more established artists and young musicians. Although one of the phrases of Marlboro is "a society of equals," it was very difficult to think of Mr. Rhodes as a colleague and not a teacher! That Berg group spent two transformational summers together studying only the Berg Quartet, and we've had two subsequent Marlboro tours as well. It gives me incredible pleasure to have the chance to work with Mr. Rhodes again. So many of my very fondest memories of music making are with him.

JW: On the Monday after the concert, the Quartet will give a master class at Play On Philly, an innovative education and social initiative that provides opportunities for personal development to children through the study of music. How do you and the Quartet approach teaching a master class and how do you hope to inspire the young students?

BS: I think every master class we teach we approach in a different manner. If we are working with conservatory students we'll probably be much more detailed in our interpretive instructions. However, if we're working with younger students, we might focus more on the technical aspects of not only playing the instruments, but also how to work together and help each other in a chamber music setting. In the end, I think what we truly want to accomplish with students, regardless of their age or ability, is to inspire them to love music making even more than they did before the class.

JW: You are an alumnus of the Marlboro Music School and Festival and have participated in a number of Musicians from Marlboro tours. How has your experience touring differed between Marlboro and now with the Escher Quartet?

BS: I have been incredibly lucky in my young professional life. I spent three life and musically formative summers at Marlboro, have been on three Marlboro tours, and now tour full time with the Escher String Quartet. All forms of touring share certain similarities. Hotels, long flights, travel delays, dress rehearsals, etc...  the major difference between touring with Marlboro and with my quartet is one is for two weeks and the other is for life! 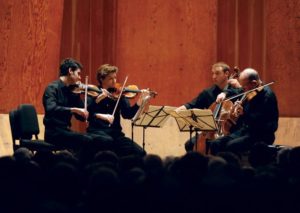 Brook Speltz performs on the 2016 National Tour of Musicians from Marlboro.

In April of 2016, I had a national Marlboro tour with the Berg Lyric Suite. Nine concerts spread all around the country. However, about halfway through the tour, I had to leave the group and catch an early morning flight from Detroit to San Jose so I could meet the Escher guys for a concert that night. I hadn't seen my quartet in about two weeks, which for us is rather long, and we had about 45 minutes in the hall together before the concert. This was no problem, as the program we were presenting we'd already performed at least 25 times. I remember the first piece we played on that program was a Mozart Quartet, which at this point already felt like an old friend. I liken it to going back home to my parents' place for the holidays. Everything is more or less as it was, and I can instantaneously adapt. We've played so many concerts together that we can be more or less in sync in our presentation of a piece, even if we haven't had a chance to rehearse much. With the Marlboro groups, we come together a week before the first concert of the tour and quickly have to recapture that magic that comes with spending an entire summer together on one piece. We have to work hard and fast to remember each other's patterns and tendencies and be able to quickly read and react to them.

JW: You perform on a 1756 J.C. Gigli on loan from your father, a cellist. Could you tell us about the musical inspiration in your family?

BS: Yes, I'm rather spoiled! My cello belongs to my father, who is an incredible artist and was a student of the legendary Gregor Piatigorsky. Both my parents are musicians and avid string quartet lovers, so my childhood is filled with memories of listening to the great recordings of not only Heifetz, Rubinstein, and the great soloist of the previous century, but also the great string quartet and chamber music repertoire. The Guarneri Quartet were my parents' idols and so, of course, they became mine. The older I get, the more thankful I am to have been exposed early on to the incredible artistry and humanity of those great musicians.

JW: Do you have any upcoming projects, either solo or with the Quartet, that you’d like to share?

BS: Yes, we have many exciting things on the horizon for the Quartet, including four recording projects, two of which will be released in the spring and fall. Two of the recordings are collaborations with very dear friends of ours, the guitarist Jason Vieaux and the flutist Carol Wincenc, and the other two are quartet albums which include works by Tchaikovsky, Dvořák, Borodin, Barber, and Ives.

On a more personal note, I'm incredibly excited to perform the Shostakovich Cello Concerto with the New York Youth Symphony at Carnegie Hall in May. I never dreamed I'd have the chance to do something like that!

The Escher Quartet performs with Samuel Rhodes on Sunday, January 15 at 3 pm at the American Philosophical Society. For tickets and information, please visit the concert page.

For more information on the Escher Quartet, please visit their website.