Conceived out of a passion for Haydn's string quartets, the critically-acclaimed London Haydn Quartet makes its PCMS debut on Tuesday, January 10, 2017 at the Perelman Theater. Catherine Manson, the first violinist, enjoys a versatile and busy career as both a musician and teacher. She is a co-founder and director of MusicWorks, a chamber music school for young musicians that takes place about 50 miles north of London, and also teaches internationally. In advance of the January concert, I was fortunate to speak with Ms. Manson about the ensemble's collaboration with Eric Hoeprich; the experience of recording Haydn; the upcoming program; teaching; and the unique instruments the artists play.

Jessica Wolford: For your upcoming PCMS performance you will be joined by clarinetist Eric Hoeprich, a musician who the ensemble is very close to. Could you tell us about the ensemble’s relationship with Eric?

Catherine Manson: The London Haydn Quartet has been playing together with Eric Hoeprich for 15 years. We started the quartet in order to promote the cause of Haydn since he brought sixty of the greatest masterpieces for string quartet into existence, and for some inexplicable reason one would be lucky to hear as many as 12 of these performed in a lifetime. We decided that someone had to play the other 48! However, it seemed appropriate that since Haydn and Mozart had enjoyed playing quintets together so much, that we should also allow Mozart quintets to sneak into the repertoire. I had worked with Eric Hoeprich in Santa Fe and knew that the combination of the instruments and the approach to the music would be a perfect match. Since then we have allowed Weber and even Brahms to join the party! 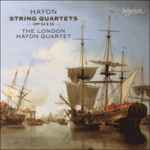 The Quartet's latest recording for the Hyperion label.

JW: The Quartet has released a series of Haydn recordings on the Hyperion label. Could you tell us how the Quartet approaches the recording process, and what the group has in store for your next release?

CM: We have been recording the complete Haydn quartets for Hyperion, six quartets at a time, starting from the Opus 9 quartets - our next set, Op. 54/55, will be released in February (though we will be bringing pre-sale copies for sale on our US tour). The process of recording is an incredible opportunity to do nothing else at all but immerse ourselves in this incredible music for a whole week at a time. It is the most challenging week of the year in physical terms - sometimes involving playing for twelve hours a day - but also the most rewarding, as one discovers endlessly fascinating aspects of the music. We record in a beautiful place in the deepest Suffolk countryside so we never have to stop for noise (apart from the odd bird song). There is no cell phone coverage or wifi so we spend the rest of the year catching up on emails but it's well worth it!

JW: The evening’s program includes two Haydn pieces and one Mozart. What was the process for selecting these particular Haydn pieces?

CM: The reason most people only know a maximum of 12 Haydn quartets is that they have not been lucky enough to come across promoters as enlightened and knowledgeable as Miles Cohen who actually knows the other works! We are always delighted when we have a chance to play some of the earlier quartets which are far less well-known. Both of these pieces are absolute gems and among their many treasures include two of the best slow movements of the 18th century. Op 20 no 4 contains the first set of variations entirely in the minor and also includes an extraordinary coda which seems to expand the universe, while the world of Op. 17, No 2 is full of generosity and wisdom as well as quick- witted antics.

JW: Amidst a busy concert and recording schedule, you give masterclasses all over the world and are a co-founder/director of MusicWorks for young musicians. Could you describe how teaching is important for your career?

CM: For me teaching is part of the same process as playing - on MusicWorks courses some of the finest chamber musicians in Europe gather for the sheer pleasure of being immersed in thinking about, listening to and playing great music all day (and much of the night!) We are all there just for the sake of music, developing our understanding of how it is put together and exploring how to make it audible to each other. Rather like the Marlboro model, coaches play together with the students in many of the groups so everyone is on the path of discovery, albeit at different stages. It is all about fostering a community of people who simply love and care about music and are prepared to devote themselves to acquiring some knowledge about it.

JW: Lastly, our audience is always interested in the instruments that our artists play on. Could you tell us something unique about yours?

CM: We all play on classical-period instruments using gut strings and bows of the time. Eric will be playing on a basset clarinet he made - his model for the instrument was an 18th century engraving from an advertisement for a concert in Riga, in which Mozart's favorite clarinetist, Anton Stadler, was playing the Mozart concerto. This engraving showed this unusual shaped instrument so Eric went to his workshop and made one. Luckily it turned out beautifully!

The London Haydn Quartet performs on Tuesday, January 10, 2017 at 8pm in the Perelman Theater in the Kimmel Center. For tickets and information, visit the concert page.

For more information on the Quartet and Ms. Manson, please visit their website.