Soprano Lucy Fitz Gibbon appears with the Society twice this season—with the first and second Musicians from Marlboro tours.

In our first artist interview of the 2019-20 Season, we discussed the two works she is singing (each of which was written within the last 10 years), how Marlboro has shaped her as an artist, and what she is currently reading.

Erik Petersons: With the first Marlboro tour on October 23, you are performing Brett Dean’s Hamlet-inspired Quartet No. 2. What can the audience be listening for and what is it like collaborating with a string quartet?

Lucy Fitz Gibbon: Brett Dean’s And once I played Ophelia is a powerful piece, born from his operatic treatment of Shakespeare’s Hamlet. In the quartet, tracing Ophelia’s journey towards her eventual suicide, we hear not just Ophelia’s own thoughts, but the words thrust upon her by others: her father, Polonius; Queen Gertrude; and of course Hamlet. Ophelia can often feel like a weak character, portrayed on stage and in paintings as a wisp of a person. But in Dean’s treatment, her choice to end her life becomes powerful, a final way of regaining agency in a world where she has been systematically stripped of it.* Musically, the piece changes character as we move from person to person. Sometimes the work feels caustic, with guttural utterances from all five performers. At other times it is lyrical, with soaring lines and beautiful melodies.

It is wonderful to collaborate with a string quartet! I grew up as a violinist, and my sister is a cellist, so I’ve always had an affinity for string instruments. Leading up to our first performance at Marlboro, we worked on this piece 10 hours a week for six weeks, so we really got to know each other and our roles in the piece in that process. As in any chamber work, we take turns having leading and supporting roles. Sometimes even the sounds I make become part of the texture of the work, rather than the foreground, and I try to match the articulation and color of the instruments, rather than the other way around. This piece is also very dramatic, and Dean’s orchestration of the piece and use of extended technique creates an array of colors and moods which help to support me as I take on each different character. 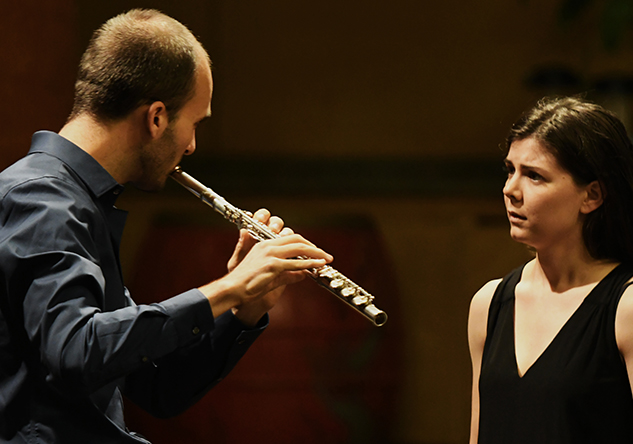 Francesco Camuglia and Lucy Fitz Gibbon perform Kate Soper's Only the Words Themselves Mean What They Say at Marlboro.

EP: During the second Marlboro tour on March 4, you are performing a work by Kate Soper with flutist Francesco Camuglia. Tell us about this work and what its technical and musical challenges are.

LFG: Only the Words Themselves Mean What They Say is an incredible piece of music, and I can’t wait to share it with the audience at PCMS! It’s absolutely a tour de force for both singer and flutist and requires an enormous range in all senses of the word: the singer has to sing pitches ranging from high D to a low D-flat (below middle C), there are moments that are sung, there are moments that are spoken, there’s a whole movement that uses beat boxing techniques, there’s an entire page of circular breathing for both performers (yes, I’ll be singing while inhaling)… At times it’s comical, and others it’s nearly frightening in its intensity. The singer and the flutist also have to exist almost as one instrument, executing certain phrases in perfect synchronicity.

From a lesser composer, all of these different factors might result in a showpiece, but not a particularly moving or meaningful work. However, Only the Words is also a brilliant exploration of three texts by Lydia Davis. In each of the three movements, we have three distinct modes of expression. The first, “Go Away,” uses the widest range of extended techniques as the singer and flutist try to process being told to “Go away and never come back.” The second movement, “Head, Heart,” is built on the natural harmonic series and is a lyrical treatment of the human condition: “Heart weeps. / Head tries to help heart.” The last movement, “Getting to know your body,” is somehow simultaneously exuberant, funny, and breathtaking.

EP: I understand that you know Kate Soper. How has your relationship with her influenced your interpretation and how you bring new music to the stage?

LFG: Yes! I’ve worked with Kate a few times, both on this piece and also on her new opera, The Romance of the Rose. I think she is absolutely brilliant, both as a composer, a performer, and as a writer. Truly, I think she is one of the most original, vibrant, curious, and committed voices of our time, and I’m so honored to have been able to work with her and to be performing her music. Kate originally wrote this piece for herself to perform with flutist Erin Lesser, and it was intended as a way for them to explore the very limits of their instruments. That means that whenever anyone else performs the piece, it will naturally be a little bit different.

The amount of extended technique in this piece also means that Kate is writing at the edge of musical orthography, where it becomes much more difficult to notate certain effects. When a composer writes a pitch, anyone can understand that—and moreover, anyone is trained to do that. But when one starts to notate certain kinds of breathing, or yelling, or multiphonics, or other less-common modes of production, it becomes much more difficult to convey exactly how that sound should be produced. Furthermore, many of us may not have tried to make those kinds of sounds before, and there are fewer established techniques for creating them. This is not to say that the score isn’t precise: it is very carefully notated! But the notation of extended techniques just hasn’t had as much time to become canonized. When Kate and I worked together on this piece, we fine-tuned each moment to make sure the extended technique, affect, and timing was just what she intended.

EP: You returned to Marlboro Music this past summer for the fourth time. How has your experience there shaped you as an artist?

LFG: It would be impossible to put into mere words how grateful I am for the time I have spent at Marlboro. My time there has been life changing, and even after four summers I am still in awe that I was given that amazing gift. But since you asked, I’ll try! Marlboro gave me time: time to work, time to listen, time to learn. Marlboro made me feel valued, and this in turn has encouraged me to trust my instincts and to be more daring in my musical choices. The other musicians at Marlboro, juniors and seniors alike, are all so incredibly talented and so generous in their music-making, open to new ideas while always striving for excellence. The idealism of this place—the nearly infinite time, the ultimate high standards, the sheer technical ability combined with openness of spirit—has been a sustaining force in my life and in my music when the inevitable return to reality occurs.

EP: What are you reading at the moment?

LFG: I pick up books and biographies related to the music I’m learning all the time. In the spring, I portrayed the great Carmen Miranda in a work by Roberto Sierra, so I read a few different biographies of her to help me get into character. I’ve also been reading the new Chopin biography by Alan Walker (I have a recording project of mid 20th-century Polish music in the works) and the Debussy biography by Steven Walsh. I also read a lot of poetry, since I’m always singing it! But a constant for the past few years is that I’ve been slowly working my way through Proust’s Remembrance of Things Past. Right now, I’m on the fifth book, The Captive and the Fugitive. I suppose this is not so different from these biographies in that Proust also alludes to the musical and artistic culture of his day, which is always fascinating to me as someone who performs that music regularly. But more than anything, Proust’s command of narrative (and thus time) and his insights into human nature are unparalleled. I’ll be reading along, following the events of some seemingly mundane dinner party, and all of a sudden Proust delivers this punch to the gut. The past thirty pages of description weren’t just filler, but some devastating commentary on social behavior—as relevant today as ever. Just like great music!