The French composer muses on his musical philosophy, the enduring value of art, and his new, Verlaine-inspired two-song cycle in his essay for the project.

Once during an interview, I was told by a journalist that I was the first “living composer” the writer had talked to. Leaving aside the complexities of interviewing a dead composer, this speaks to the anomaly of the composer in a musical society that predominately glorifies the past—and in turn raises the question of what a composer’s responsibilities are and what it means to be a composer today.

Performers have confided in me a sometimes ambivalent attitude toward the music of our time, an attitude that takes the form of mistrust or incomprehension bordering on condescencion toward the contemporary. This often results in a double standard on their part.  As for my fellow composers, I sometimes find them a little too submissive to the dominant direction of musical thought since 1945. As further articulated in my second book Crises (Foreign Notes II), my hope is to establish a dialogue that can begin on a foundation of historical and theoretical premises different from that which prevails today (and is mostly based on modernist myths). 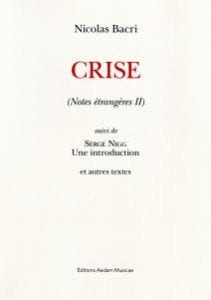 A general crisis of sense has shaken our society since at least 1914, as many have pointed out; it is a crisis affecting art and culture. This crisis is the result of a refusal of meaning (of sense, of signification) in favor of a constantly renewed sign, as if the sign could replace the meaning that may appear disappointing. Indeed, the quest for the meaning of a work can only bring us back to ideas and feelings we already know since it basically arises from our eternal questions. However, to arrive at these eternal questions is the actual value of this quest, provided of course that the way we go about it delivers something as essential to the one who is listening to the music as to the one who is playing it.

As I say in my book, it is time that will determine the works of quality, separating those that are fun to play but not overwhelming from the works of real value, those that will remain in the repertoire not because they are especially "innovative" or allow players to “show off” but because the interpretative approaches they suggest seem inexhaustible. In other words, the purpose of music is no less than a tremendous endeavor to elevate the level of consciousness of both the player and the listener.

However, for theoretical reasons (on which musicologists can expand), the perception of a value has long coincided with a sense of artistic innovation. It's simply because those artists were born in a system—the tonal system for music, perspective for visual arts—which was believed to define the limits of art itself. Therefore it was natural that the most personal artists of the past would satisfy their need for strong subjective expression by expanding the limits under which they were born. So, we may now have the retrospective illusion that the great works of the past were important because of innovation. In reality they were innovative because they were important.

My music questions the difference between tradition and modernity but also between modernity and modernism, modernism and postmodernism, tradition and postmodernism.  One can say that each of my works written after my post-serial period is a form of escape from the style of established orthodox modernism that has been unfairly labelled “contemporary music” since the Cold War; a new insurgence of modernity within tradition (and tradition within modernity). This aesthetic tension, sometimes exacerbated, sometimes appeased, would reinvent time and again the nature of its break with tradition while simultaneously building on it. 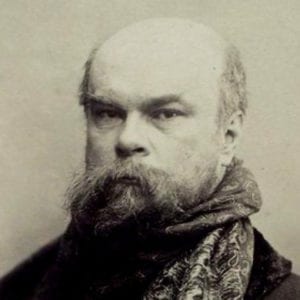 When Nicholas Phan asked me to express some ideas on my composition and the times that we live in as compared to those of the post-World War I era, I thought Verlaine presented a nice opportunity to emphasize the contrast between how “Bohêmes-artists” experienced love and sex and current views on the topic. At the end of nineteenth century, the bohemians were at significant risk of being condemned for their sexuality. This gave me a musical idea: to compose two songs about happiness and sadness in homosexual love.

As is the case in most of my vocal works, the musical language is about examining the tonal tradition and playing with its psychological and psychoanalytical associations, as well as, in this piece, its societal implications. For the epigram of his poem Il faut, voyez-vous, nous pardonner les choses (“You see, you’ll have to forgive us a few things,” from Romances sans paroles), Verlaine uses “De la douceur, de la douceur, de la douceur” (“Sweetness, sweetness, sweetness”). I think this makes a very nice title for this very short cycle of two songs.

Cythère, from Fêtes galantes, is the basis for the first song. It is called Chanson gaie mostly for the double meaning of the word “gay” in English. Of course, for Verlaine, Cythère was not precisely intended to depict homosexual love. Therefore I would not have allowed myself to involve homosexual implications in this song had I not been aware of Verlaine’s own bisexuality and his interest in lesbian love, to which some quite unambiguous poems bear witness. The harmonic design invokes a kind of levitation-like effect (especially in the refrain) that conveys the pure delight of two united bodies and souls with only nature as a witness.

The second song, based on Il faut, voyez-vous, nous pardonner les choses, opposes the first, depicting a retreat, a relationship concealed far from the eyes of others. This is achieved in the song by using an archaic (and somewhat Ravelian) counterpoint that evokes the traditional view on homosexuality that provokes shame and remorse. This song is called Chanson triste (Sad song).