Michael Thurber has shaped his own creative path as an artist and composer. The double bassist has taken the stage on The Late Show With Stephen Colbert, written music for the Royal Shakespeare Company, and became an internet sensation when he co-founded the YouTube channel CDZA in 2011. Collaborations are at the root of his success, and his appearance with Marina Piccinini and Tessa Lark on Sunday, November 3 will showcase his strengths in a genre-bending blend of classical and international folk sounds. We caught up with Michael recently and discussed the program and his relationship with both artists.

Erik Petersons: Your program with Marina Piccinini and Tessa Lark opens with your arrangements of Bach’s Two and Three Part Inventions. What are the challenges of arranging and playing a work originally written for piano?

Michael Thurber: These arrangements have really been a collaboration between all three of us. Bach's music is so universal and so indestructible that it usually sounds great in a variety of instrumentations. The challenges however, are numerous. Right off the bat, there are often basic issues with register. For instance, there are several moments in the trio that were too low for violin and too high for flute, so we had to make decisions about where and when to change octaves and how that would affect Bach's counterpoint with the other voices. Tessa and Marina did some amazing work with this and found some very creative solutions. There's also a challenge in approaching the interpretation of this music... there are slightly different theories/practices behind Baroque keyboard playing vs. Baroque string/woodwind playing. One has to decide whether to approach the music through the lens of their own instrument, which might differ significantly from the original approach intended for a keyboard piece, or if they will try to incorporate elements of the keyboard approach. It's a fun challenge, and I'm excited by where the three of us have landed. I think we have arrived at a middle ground that feels innovative and exciting, while still respecting the historical performance practice.

EP: You and Tessa perform frequently and have just released an album together. How long have you known each other and what do you enjoy about your collaboration?

MT: Tessa and I have known each other for about five years but had heard of each other for many years before that. Tessa is probably my favorite person to make music with. We have the same musical values... we both love the same type of tone on a string instrument, we both have the same instinct for rhythm and intonation, and most importantly, we both have a deep passion for exploring where different musical traditions converge and diverge. We have enormous musical appetites and are always pushing ourselves to learn. I always come away from a concert/rehearsal with Tessa deeply inspired and feeling light. She has a great sense of humor which always keeps things fun.

EP: How do you and Tessa know Marina Piccinini? What has it been like to work with her? 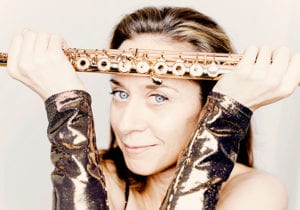 MT: Tessa and I have always known of Marina—she is one of the most legendary flutists alive—but I had never met her until we began planning this program for PCMS. This is a dream team, and we couldn't be more honored to share the stage with her. We were so excited to find that she has the same musical values and flair for joy that we do. In addition to being a virtuoso, Marina is a musical explorer and remains very open minded to new styles and interpretations of music. She has a very creative mind and amazing attention to detail. She has been able to guide Tessa and I through some of the pieces, in particular the Schulhoff trio, which she knows very well. We've learned a lot from her and have already had a lot of fun.

EP: Between the Bach and Bartók, you will be giving the world premiere of a trio by Paul Wiancko. Tell us about the work and what the audience can listen for.

MT: Paul is both an amazing musician and human. I love and admire his talent, creativity, and warmth. It's so exciting to be premiering this piece. Paul's music, in my opinion, is completely magical. He has a gift with texture and timbre... he creates these sound worlds that are so delicate and colorful. He also has a rhythmic vocabulary and sense of form that is very accessible and keeps an audience engaged. This particular piece, while it has many moments of virtuosity, is quite dreamy and atmospheric. I think it will transport the audience.

EP: Your program ends with three fado works. Where does this genre have its roots and how would you characterize the works you will be performing?

MT: These fado pieces were Marina's idea, as part of her heritage is from Brazil. Fado has its roots in Portugal. It's often characterized by its beautiful, mournful melodies and folk-like lyrics that are often sad.  As with many folk styles, many fado songs have been passed through generations aurally, so every musician plays them slightly differently. This opens up many doors for interpretive possibilities. I wanted to take advantage of this malleability by integrating musical elements from the three of our backgrounds in European Classical music.  You will hear this especially in Variacoes Em La Menor. While the melody and initial accompaniment are in a traditional fado style, the form and variations that ensue are more in the spirit of a classical 'theme and variations' with virtuosic flourishes reminiscent of Paganini.

EP: Tell us about the instrument you will be playing for your recital. What is its history and what do you love most about it?

MT: I love my bass so much! It is a modern instrument made in 2005 by star luthier Aaron Riley of The Guarneri House in Michigan. This bass is very versatile, which works well for me since I play many styles of music. It is on the smaller side, which makes it easier for me to get into the higher registers for solo playing. It is not a loud instrument, which makes it less ideal for orchestra playing, but it has an incredibly clear, warm tone that I love.

Michael Thurber appears with PCMS on Sunday, November 3 at the Pennsylvania Academy of the Fine Arts. Visit his website for a full bio or the concert page for tickets.