A native of Colorado, Rebecca Albers started playing piano and violin from the time she could walk. She received both her bachelor's and master's degrees from the Juilliard School, where she studied with Heidi Castleman and Hsin-Yun Huang. Having just completed he sixth summer at the Marlboro Music Festival, Ms. Albers is preparing to start her fourth tour with Musicians from Marlboro. Ms. Albers was kind enough to answer a few questions about her time at the festival and on tour, her work in the Minnesota Orchestra, and her musical upbringing. You can hear Rebecca and the rest of this Musicians from Marlboro touring group on Friday, October 9, at the American Philosophical Society.

Patrick Burke: As this is not your first Marlboro Tour, can you tell our audience a little bit more about what your first tour was like? What are a few of the differences between Marlboro the Festival and Marlboro on Tour?

Rebecca Albers: My first Marlboro tour was back in 2007. It was a tour formed around two pieces that were performed at Marlboro before my time there, so I was an add-on in order to help complete the program. It was a fun and inspiring group of musicians, and it was a fairly relaxed first tour experience since I was only playing one piece. I was probably the greenest member of the group, and it really felt like a natural extension of the festival as I got to hang around and learn from more experienced musicians.

For me, two of the main differences between Marlboro the Festival and Marlboro on Tour are in the rehearsal process and the performance experience. At the festival, groups rehearse for two hours, three or four times per week, for anything from one to seven weeks. On tour, the musicians get together to rehearse a week or so before the first concert, but we meet every day, and often spend more than two hours per day on each individual piece. We also know going into the tour rehearsal process that we will be performing no matter what, and this knowledge, along with the more compact rehearsal schedule, creates a different kind of focus and intensity. The performance experience differs in that at Marlboro, it is extremely rare for a group to perform their piece more than once. On tour, obviously, this isn’t the case. We get a second, third, fourth (etc.) chance to try different ideas and grow through the simple act of getting on stage to play the same program more than once.

PB: Peter Stumpf is a close friend of PCMS and appears with us often. For this tour he is the acting senior member of this group. What has been your experience collaborating with him?

RA: I first worked with Peter at Marlboro in 2006 when we studied and performed a Mendelssohn string quartet together. From the very first rehearsal it was clear that Peter was at once a great collaborator and a great teacher. In our rehearsals, I never felt like I was being taught, but as we worked together, I realized I was somehow magically learning a ton. Peter brings humor, kindness and an inspiring clarity of intention to music and the rehearsal process. He is also the kind of cellist who makes the juggling act of the viola’s supporting role feel comfortable. I’m thrilled to be playing with him again.

PB: Of the repertoire on this particular tour, which of the pieces are you most looking forward to performing and/or getting to know better through multiple concerts?

RA: I love this Mozart quintet. I’ve rehearsed it in the past but have never had the opportunity to perform it. It’s such a joyful, exuberant piece, and I especially love that Mozart chose to end his final major chamber music work with the viola in the spotlight.

PB: After the summer festival and tour, you will return to the "real world" as Assistant Principal Viola of the Minnesota Orchestra. I am wondering if you could explain for me some of the differences between life in Vermont and in Minnesota?

RA: I feel very lucky in that I love my life and my job in Minnesota. I have fantastic colleagues in the orchestra and am surrounded by a close-knit and inspiring musical community. This said, there is really no place on earth like Marlboro. Something unique and meaningful is created through working, playing, eating and living with a small group of people for seven weeks in beautiful southern Vermont. It is possible to get to know one another on a deeper level, and this kind of community is difficult to find in “real” life. The closeness created within the orchestra when we go on tour is maybe the nearest I’ve come to it, but even this isn't quite the same. Musically speaking, at Marlboro there is the luxury of time. In the orchestra we learn and perform a different program every week. It’s exhilarating, but at times, maybe less personal. There isn’t time to explore every rabbit hole when you know you have a set amount of rehearsal time, performing isn’t optional, you’re one of many playing the same part, and next week’s program is looming. At Marlboro, we’re free to explore because there is no time constraint and no required performance. I think the fact that it isn’t real life is part of what makes being at Marlboro so incredibly special.

PB:  You grew up in a family of musicians–you and your sisters are in a trio together and individually you all have your own impressive careers. Could you tell our audience a little more what it is like growing up with fantastic musicians as siblings? 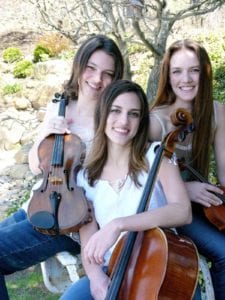 RA: As the youngest child in a family of musicians, my world has always been filled with and almost defined by music. My mom is a Suzuki violin teacher, my dad was a choir director and a pianist, and my older sisters, Laura and Julie, are a violinist and a cellist, respectively. I think it’s worth mentioning that our brother David, (though he played many instruments as a kid), is a finish carpenter. Though there was never actually any familial pressure to make a career of it, I’ve never wanted or been able to see a life for myself outside of music. According to my mom, I started harassing my sisters for their instruments right around the time I learned to pull myself to my feet using their scrolls. It could be said that my musical relationship with my sisters was a little rocky at first, aside from the scroll pulling, with our parents actually paying them to play with me and be nice about it. Now that we’re all close to the same height, I think our collaboration is a bit more rewarding for everyone. Our trio has sort of taken a back seat to our individual careers, but we still see each other and play together as often as possible. I’m beyond happy that Julie just moved to Minnesota this fall as the new principal cellist of the Saint Paul Chamber Orchestra. Our dogs get along almost as well as we do.

Rebecca Albers  performs as part of the Musicians from Marlboro tour on Friday, October 9, 2015 at the American Philosophical Society. For tickets and information visit the concert page.

For more information on Rebecca you can visit her artist page, or click here to hear her 2015 performance at Marlboro of Mozart's Piano Quartet in G Minor, K. 478