Gearing Up for Another Great Season

I hope everyone is having a wonderful summer!  I wanted to take a moment to update you on the summer goings-on here at PCMS.

After a couple of months spent buried in seating charts and order forms, Bradford is currently putting the finishing touches on the subscription process.  He has been hard at work all summer matching subscribers with their preferred seats, and you'll see the fruits of his labors soon in the form of real tickets.  Look for them in your mailboxes during the first week of September. 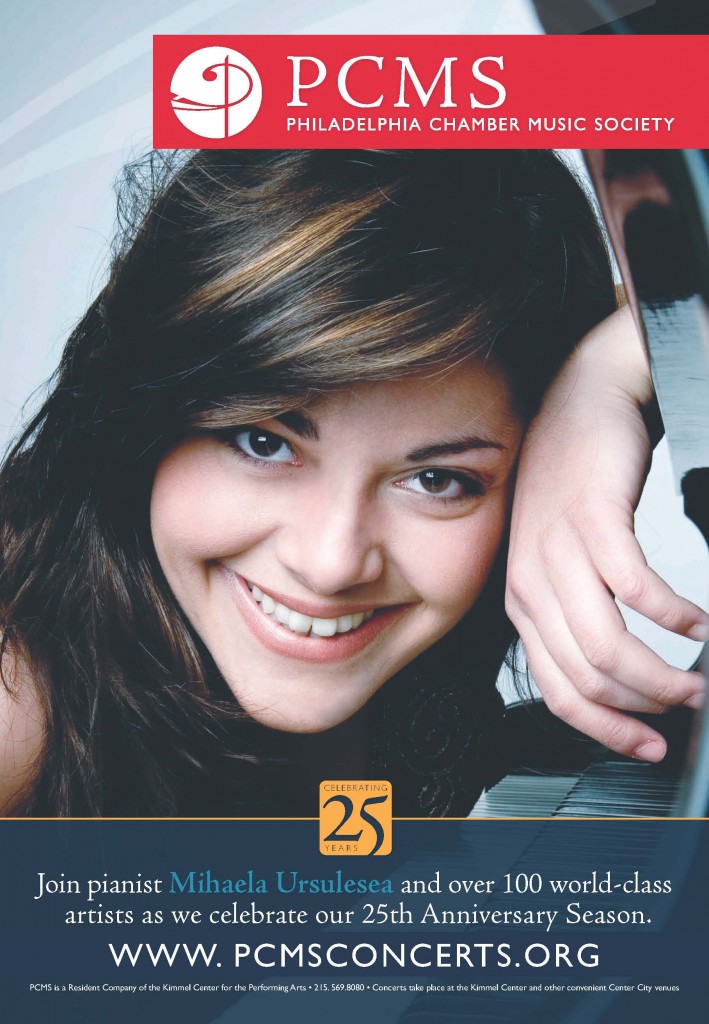 I have spent the summer working with Jacob and Miles on all of our ads and publications -- brochures, billboards, bus shelters, flyers and the like.  To the right you can check out a sneak preview of what one of the bus shelter designs will look like.  We've been working extra hard to streamline our "look" for our 25th Anniversary Season and hope you like the results.

Among my other summer projects, I'm pleased to announce that we've launched our new mobile applications for iPhone/iPad and Android.   Download them today via iTunes, and while you're at it, check out our other snazzy online tools, including sound clips, photo galleries and newly-added preview notes for each and every PCMS program.   Even more improvements are on the way -- including a renewed Facebook presence and the inaugural PCMS Podcast coming in October.

On the recreational side of things, we traveled up to the Marlboro Music Festival in July to see our co-workers and hear some of the artists appearing this year on our series. We were lucky enough to hear pianists Jonathan Biss and Ignat Solzhenitsyn (playing Ravel & Schumann, respectively), baritone John Moore (a bravura performance of Peter Lieberson's The Coming of Light) and many top-notch string players (Ben Beilman, Peter Wiley, Hiroko Yajima, etc).  Bradford has been practicing the piano more than ever this year (ask him what he's been playing).  And we've been exploring a lot of amazing music all summer long in the office -- from new recordings by our favorite chamber artists to some of my more outré interests:  Saharan guitar music, Zambian psych-rock, blissed-out German soundtracks and obscure Southern blues.

I promise more frequent posts -- including concert tips, artist interviews and some exciting new staff announcements -- as we edge closer to our opening night concert on October 15.  We are very much looking forward to seeing everyone at the concerts and hope you can join us early and often during our 25th Anniversary Season.