The Master Class Series this season was filled with a wonderful diversity of experiences for the students that were involved.  And any audience members who attended these classes were offered an enhanced understanding of how sound is formed and shaped through the distinct techniques that various instruments employ to communicate ideas.  In fact, this was most clearly demonstrated in Hopkinson Smith’s lute master class at Curtis in December.  This might have seemed an odd placement as Curtis does not have any lute students.  But “Hoppy’s” genius was seen in devising a master class around the same work—Bach’s Cello Suite in C Minor (BWV 1011 and 995).  As he coached a cellist, guitarist and violist, it was clear how the unique potential of each instrument shed new light on the same music, and in turn, he deftly revealed the nuances of color and phrasing from his perspective as a lutenist.  Far from being an obstacle between master and student, the assorted instruments on stage only heightened the appreciation for what Bach was aiming at.

Below are a few other master class highlights from the Education Program this year. 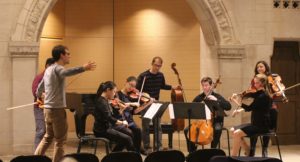 The Dover Quartet worked with Temple University students on Dvořák’s String Quintet in E-flat Major (Op. 97) and his String Quartet in F Major (Op. 96).  Having just begun their three-year residency at Northwestern University, their knowledge and keen awareness of the inner workings of the composer’s intent showed a maturity beyond their age. 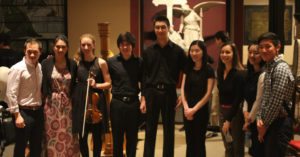 Sending the Parker Quartet to work with a Piano Quintet at the Philadelphia Sinfonia gave PCMS the opportunity to forge a new partnership with this long-standing youth orchestra.  During the hour they spent working on Dvořák, the rest of the orchestra members (and their parents) listened in.  As the master class ended, Gary White, the orchestra’s music director and conductor, noted how the Parker’s comments connect closely to what he wants the full orchestra to do as well—especially when it comes to listening and responding to each other. 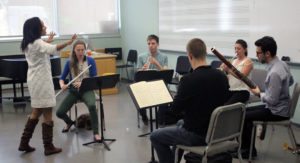 The Imani Winds gave a superb master class at Temple, working with a wind quintet to become actors through their music.  They didn’t spare anything in their efforts to push the students to a new level—their ideas exposing how the character of music is largely dependent on things even beyond the pages of the score. 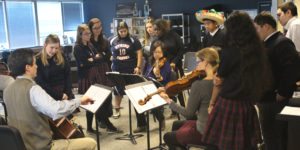 The Daedalus Quartet took a contemporary music program to String Theory School—another new educational partner this year.  After performing excerpts from the world premieres they would perform later that night, they invited the students to examine their sheet music, demonstrating how extended techniques were both notated and executed.  It was a great connection that drew the students in and gave them both an appreciation for, and interest in, new music. 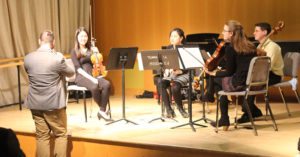 The Miró Quartet reestablished the vision for how Schubert conceived his music to be played.  The Temple student’s rendering of his Quartet in A Minor (D. 804) was enlivened dramatically after the Miró showed how his dynamics are to be interpreted as color rather than volume.  They also highlighted how the composer’s harmonies directly related to the shaping of the musical line. 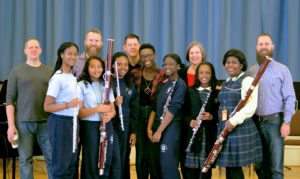 Other notable interactions included the coaching by Christian Poltéra and Karen Gomyo at Settlement Music School; eighth blackbird’s work with Play on Philly students; and Francesca dePasquale’s appearance at both Masterman School and the Academy at Polumbo.  In addition to this, our “Branching Out” Program in partnership with the Free Library sent the Aizuri Quartet to the Coleman Northwest Regional Library in a program that reached nearly 100 Germantown residents and our annual children’s concert with Juliette Kang, Ying Fu, Yumi Kendall and Joe Conyers filled the Library’s Central Branch with over 300 school children (featured picture above). 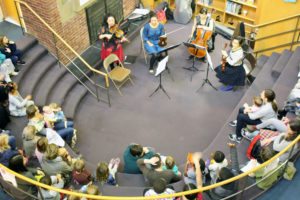 Reflecting on these events has reminded us of the value of music education.  In addition to completing a well-rounded education and its benefits to academics and cognitive development, “the arts help students explore realities, relationships and ideas that cannot be conveyed simply in words or numbers” (Spread Music Now).  We hope that the musical exchanges that take place around Philadelphia through this program continue to foster the understanding of music as something necessary for the human experience.

PCMS is grateful for the support we receive through the Lois and Julian Brodsky Education Fund; the Paul M. Angell Family Foundation; the Cassett, Connelly, Dolfinger-McMahon and Presser Foundations; the Hirsig Family Fund; and countless donors, who have made over 50 education and outreach activities possible every year.