As Miles promised in his weekly e-mail, I wanted to share with you this transcript of Richard Goode's speech at the Chamber Music America banquet in honor of Tony Checchia and Frank Salomon.

We’re all gathered here to honor Frank and Tony–not only the many fine and difficult things they’ve done, but the extraordinary way they’ve done them, a way that inspires not only our enormous admiration, but also our love and gratitude. They’ve both achieved that delicate balance, combining high musical standards with a deep concern for ethical and human values. They’ve made things hard for themselves, and better for all of us in pursuing an ideal, while being at the same time wonderfully decent and generous and fair. 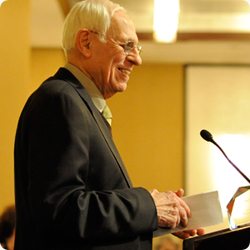 In so many ways I think they take their inspiration from the great music they serve and the vision embodied in that music, which is the ultimate reason we’ve all come together tonight. One of the happiest realizations of that vision is Marlboro, that unique place whose goals are the greatest possible musical excitement, freedom, and harmony for all of the participants. One of last summer’s musicians, the pianist Gabriele Carcano, wrote eloquently about what his first experience there was like:

“Life in a small community is like a magnifying glass of feelings and relations. There is a very strong and special energy made by this combination of all those people living together. To play with, or to listen to such wonderful musicians everyday makes  you live unbelievable moments at a very high frequency…I had in Marlboro a lot of those moments when you feel that music’s flow reveals the flow of life and you’re moving in it. Those moments when you also feel that you’re telling about something very secret and fragile, and then, in chamber music, it happens that you suddenly realize that the voice that’s speaking is not only yours, but the one of another person playing with you and talking about you and about the same feeling.”

Gabriele prefaced his impressions with these words: “Marlboro–such stuff as dreams are made on”–but he obviously knows about what makes dreams possible, because he also says that, at Marlboro, “Life is perfectly organized, everyone working there really does his best to keep this place like a musical fairyland, and to give the possibility of keeping our attention only on music.” Of course, there’s no fairyland, no freedom or harmony without rules, and in that regard Marlboro sometimes suggests to me a kind of enormous game, one that involves 70 or so musicians, some 220 musical works, and takes 7 whole weeks to play. It’s definitely not like chess, a battle of attack and counterattack; more like the ancient Asian game of Go, with many pieces in a field of constantly shifting situations and relationships. Go is so much more complicated than chess that so far it has defeated all the computers. 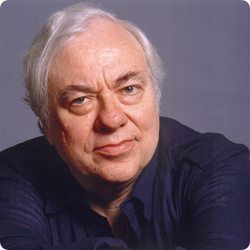 Of the Marlboro version, Frank and Tony are the undisputed grandmasters. With the help of the remarkable people on their staff, they survey the whole board and somehow keep everything in play. To speak first of Tony–Tony has this wonderful gift–you could call it Creative Worry; he seems to sense problems before they occur, to see and suffer all the possibilities. He has, to a supreme degree, what Henry James called “the imagination of disaster.” A typical Tony greeting at Marlboro is: “Richard, is anything all right?” He has a marvelous sort of buoyantly cheerful pessimism; sometimes he seems almost to welcome obstacles–they add to the interest of the game. Some of the obstacles are musical; a lot have to do with egos, and here Tony has always amazed me by a tact which goes far beyond ordinary diplomacy–though he’s superb at that–but springs from his great kindness, empathy, and the willingness to listen. Tony’s instrument is, of course, the bassoon–that most supportive, least prima donna-ish of the woodwinds.

Both Tony and Frank have in various ways been under the powerful influence of Rudolf Serkin. I’m convinced a certain amount of Tony’s seeming psychic clairvoyance came from tuning in, both at Marlboro and Curtis, to that very mercurial and unpredictable man. On Frank, I feel the imprint of Serkin’s striving, his rigor in taking the path of most resistance. Also Serkin’s indefatigable practicing, his daily hours of scales and exercises–could that be an influence on Frank’s fanatical work ethic?–or is that just a meeting of minds, and superegos? On this subject: I once did a version of Cole Porter’s “You’re the Top” for Frank’s birthday; this verse was definitely the favorite in the office:

You’re the top!
You’re a man of action!
You won’t stop
Till you’re put in traction!

Over the years, Frank has played many roles in my life–as dear friend, as manager–the best one could ever have–as exhorter to greater efforts and tremendous support in difficult times. The famous Salomonic gravity is real; yet I like to think of Frank as a wise and moderate extremist–extreme in his idealism, in his zeal for unfashionable causes,in his desire to educate and enlighten us all, and in his unwavering dedication to his artists. And of course he is very much a family man. Marlboro started out, with the Serkins, the Busches, Moyses, and Singhers, as a family place. This devotion to family, and by extension, community, is part of what makes it much more than a summer school, but an idea that has grown over the years, and a place where relationships start that can last a lifetime. Just think of it–60 marriages in 60 years–can that be just a coincidence–or is it a policy?

In imitation of Frank’s inimitable poetic style, I want to conclude with this, dedicated to the two of them:

Frank and Tony, Tony and Frank
You never set out to break the bank.
If you’d sought notoriety or spurious glamora
You’d never’ve gone in for musica da camera.
If you’d yearned for the fast track, and for living like pashas,
You’d have probably steered clear of the Kirchners and Sashas.
The high road you’ve taken, to that place on the hill,
The values you cherish that inspire you still–
For all that you’ve done, from our hearts we give thanks.
Ah, if only there were more Tonys and Franks!

In Their Own Words: Robert Levin comments on his program