Sixty-plus concert seasons have become the norm for us here at PCMS. What started as a seven-concert series in 1986 reached a peak of 66 unique concerts in 2010-11, with another 63 comprising the current season. Is this the norm for chamber music series in this part of the country, or do we as Philadelphians possess a near-embarrassment of musical riches? To answer this question, I took a look at the other major series on the east coast to see how PCMS stacks up. 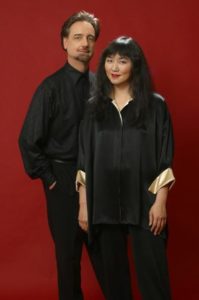 Among our east coast brethren, New York's Chamber Music Society of Lincoln Center (CMS) probably comes closest to the PCMS model. Although it offers about half the number of concerts, CMS's 32-concert series features a compelling variety of big names and up-and-comers. The co-artistic director-couple of David Finckel and Wu Han (right) provides strong artistic leadership. Like PCMS, the organization fosters a high-quality education program and actively commissions new works. CMS also offers a $60 special program for younger concertgoers, but it limits members to three concerts, as opposed to PCMS' Unlimited Card Program, which offers anyone 35 and under access to all 60 PCMS events for that same $60 price. Ten dollar tickets are also available to students (PCMS does this too), but CMS limits them to rush-only (PCMS permits students to reserve anytime).

Of course, New York City offers a wealth of other chamber music options. Venerable Carnegie Hall presents a comparable number of chamber music concerts and recitals to PCMS, and with significant artistic overlap, but at much higher prices. If you wanted to hear baritone Christian Gerhaher with András Schiff, for example, the cheapest seats at Carnegie are $43, whereas with PCMS it's never more than $23 (plus the $4 Kimmel surcharge) for the best seats in the house. On the other end of the price spectrum from Carnegie, the century-old People's Symphony series offers a trio of subscription packages that range from $37-$61 for an entire six-concert series; Richard Goode, the Juilliard Quartet and many other core PCMS artists are prominently featured.

Outside of Midtown, the 92nd Street Y's solid series features about a dozen concerts per season (this year's slate includes two of my personal favorites in the Quatuor Mosaïques and the Tokyo Quartet). Mannes College's Schneider Series presents a seven-concert season focused on compelling young groups such as the Elias and Old City Quartets and Musicians from Marlboro. Downtown clubs such as Bleecker Street's Le Poisson Rouge inject innovative programming, alternative venues and alcohol into the chamber world. In the shadow of the Brooklyn Bridge, Bargemusic presents a wide variety of concerts (often mixed ensembles and nearly always at $35 a ticket). And on the other side of the bridge, the 10-year old Brooklyn Chamber Music Society presents nine concerts per season at $30 per ticket.

To the south, Washington D.C. is another chamber music haven, between the 23-concert, eight-venue Washington Performing Arts Series (tickets start at $23 and go up to $115 depending on artist and venue; student tickets are offered but limited) and the Kennedy Center's Fortas Series, which features 12 concerts, significant artist overlap (the Orion and Takács Quartets and the KLR Trio, to name a few) and the regular participation of Kennedy Center Music Director and former Philadelphia Orchestra conductor Christoph Eschenbach. Tickets for most concerts in the series cost $32-$50.

To the north, Boston's BCMS has been around for almost 20 years. Its 2011-12 slate includes a dozen concerts (including four summer sessions) and features a number of piano quintets. Tickets for this series typically range from $20-$53.

While all of these presenters do wonderful work -- after all, they are our partners in the field, and if we weren't so busy attending our own concerts, we'd be going to theirs! -- may I be so bold as to say that PCMS compares favorably in quality, variety, affordability and accessibility? We like to think to so, but of course we're not the sole arbiters. What do you think? We welcome your thoughts and comments below.

Special Programming Not Uncommon at PCMS

Marlboro Loves Philadelphia: A Short Intro to the Musicians from Marlboro Touring Program